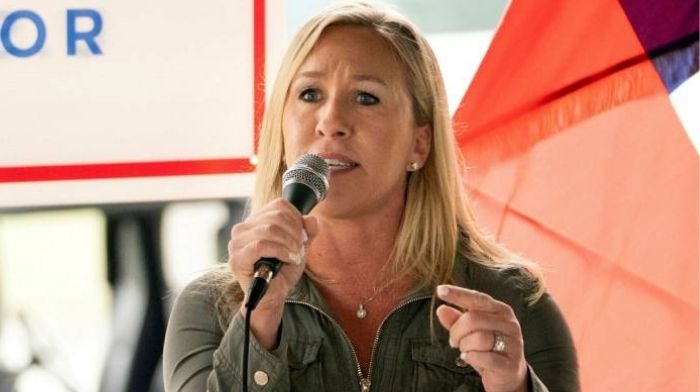 Embattled pro-Trump Georgia Congresswoman Marjorie Taylor Greene slammed the media Thursday prior to a vote by the House on whether or not to strip her of her committee assignments.

Greene has come under fire for statements she made prior to being elected to Congress, many of which were deemed by Democrats and the media as racist and anti-Semetic.

In her speech, Greene was quick to call out the media and turn the tables on her accusers, saying, “Will we allow the media, that is just as guilty as QAnon, of presenting truth and lies to divide us?”

She began her speech saying that she had not really had a chance to get to know most of her colleagues, and they may have a warped view of her due to extensive media narratives: “You only know me by how Media Matters, CNN, MSNC, and the rest of the mainstream media is portraying me.”

“Any source of information that is a mix of truth and lies is dangerous,” Greene went on to say, “Big media companies can take tiny bits of what we say, and portray us as someone we are not.”

She spoke of wanting to work with all members of Congress, but stated, “it should always be America first, there is nothing wrong with that.”

.@mtgreenee: “If this Congress is to tolerate members that condone riots that have hurt American people… but yet wants to condemn me and crucify me in the public square for words that I said and I regret a few years ago, than I think we are in a real big problem.” pic.twitter.com/oQK1itjbIx

Greene also expressed regret over some of her past comments in support of QAnon.

“I was allowed to believe things that weren’t true and I would ask questions about them and talk about them, and that is absolutely what I regret.”

Currently, Rep. Greene sits on the Education and Labor and Budget committees.

Watch her entire speech below.

Greene Had Previously Apologized To Her Colleagues

Republican Leader Kevin McCarthy (R-CA) has taken heat recently for Greene’s comments, and Democrats have demanded some sort of reprimand of Greene by McCarthy.

Leader McCarthy and the freshman member of Congress held a 90 minute meeting on Wednesday, but little is known about what was discussed.

Democrats had stated that if McCarthy was unwilling to take action regarding Greene, that they would consider voting to strip her of her committee assignments.

It’s not just me they want to cancel.

They want to cancel every Republican.

Since everyone is talking about me, here are the statements that the Fake News Media refuses to share with the American public during this Democrat mob cancel campaign:

Several GOP members rose to her defense at the meeting, such as House Freedom Caucus Chairman Andy Biggs (R-AZ).

The Democrats’ moves to strip Congresswoman Greene of her committee assignments for thoughts & opinions she shared as a private citizen before coming to the House is unprecedented and unconstitutional, & these steps are a dangerous slope for our nation. https://t.co/35Gpk1Ndgo

Still, Greene wasn’t believed with what she viewed as a lack of support from her own party’s leadership.

If @SpeakerPelosi was the minority leader, she would pull every identity politics trick in the book to defend her member.

These are the reasons they don’t want me on Ed & Labor.

It’s my identity & my values.

RELATED: Marjorie Taylor Greene Fires Back After Mitch McConnell Calls Her ‘Cancer’ To The GOP

Greene Actually Gets Help From Democrats

Marjorie Taylor Greene may get stripped of her committee assignments, but she can safely say that she has gotten help from her Democrat colleagues.

Because of the Democrats’ threatened punishment, Greene has gotten a steep boost in fundraising.

As of Wednesday, Greene had raised $175,000. In a tweet, she thanked all who had donated. And in yet what may be described as yet another controversial comment, Greene stated that, “They are attacking me because I am one of you. We will not back down. We will never give up!”

Thank you to every single America First Patriot who donated to protect my Congressional seat from the Democrat mob.

They are attacking me because I’m one of you.

We will not back down. We will never give up!