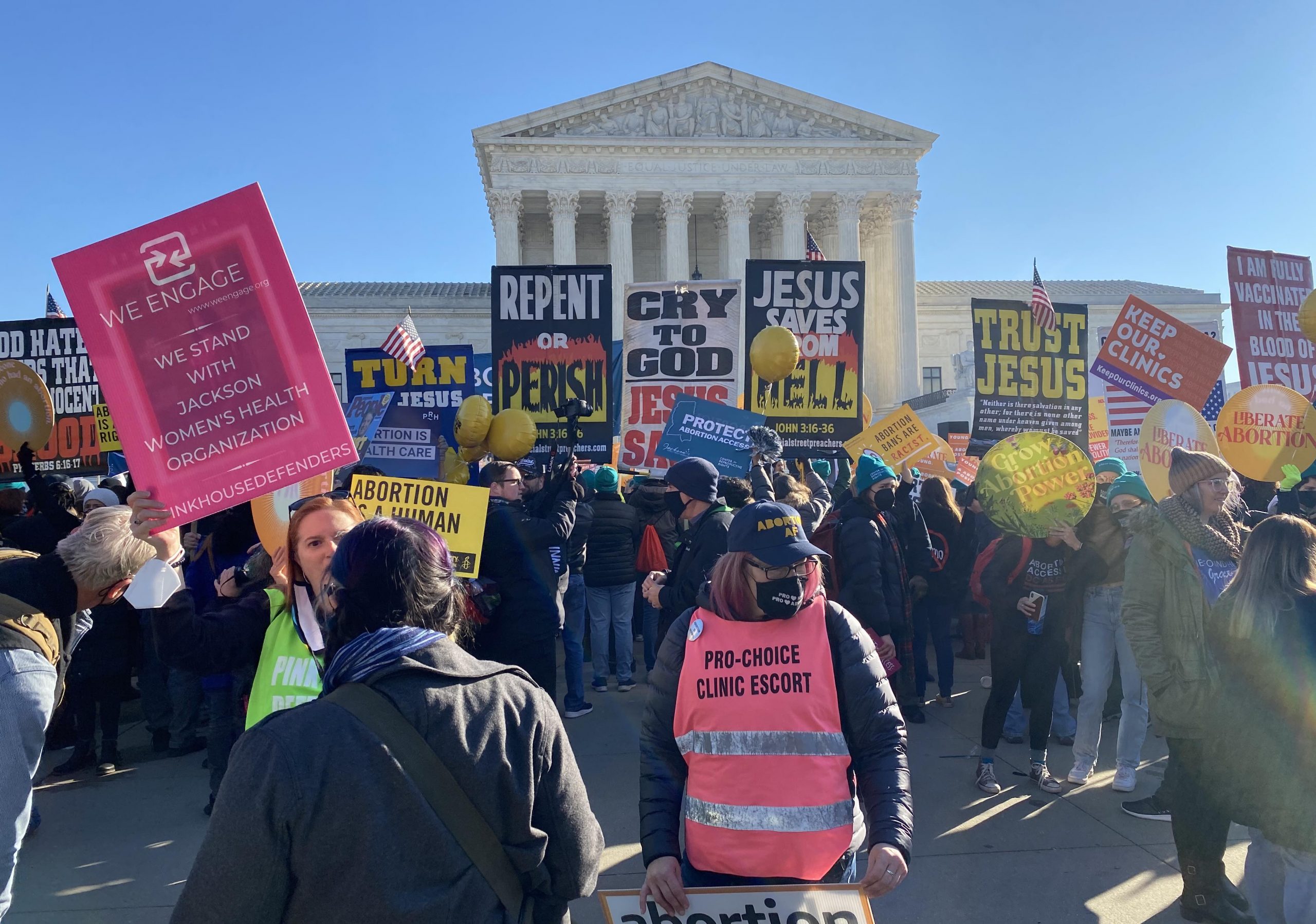 Supporters and opponents of abortion rights protest in front of the Supreme Court before Wednesday’s oral argument. (Katie Barlow)

It has been nearly 30 years since the Supreme Court’s decision in Planned Parenthood v. Casey, which reaffirmed the constitutional right to abortion that the court first recognized in Roe v. Wade. Only one justice who participated in Casey is still on the court now: Clarence Thomas, who joined a dissent in Casey arguing that “Roe was wrongly decided, and that it can and should be overruled.” After nearly two hours of oral argument on Wednesday in Dobbs v. Jackson Women’s Health Organization, Thomas and the other members of the court’s six-justice conservative majority seemed poised to uphold a Mississippi law that bans almost all abortions after the 15th week of pregnancy. That decision would further curtail the right to abortion and undermine a key component of Roe and Casey. But the justices were once again deeply divided over whether to formally overturn those precedents.

Enacted by the Mississippi legislature in 2018, the law – known as the Gestational Age Act – has never gone into effect. Both a federal district court and the conservative U.S. Court of Appeals for the 5th Circuit blocked the law, explaining that Roe and Casey bar states from banning abortions before fetal viability – the point around 24 weeks of pregnancy when the fetus can survive outside the womb. Mississippi asked the justices to weigh in and, after the court agreed to take up the case, the state began urging the court to overturn those landmark decisions.

Arguing for the state on Wednesday, Mississippi Solicitor General Scott Stewart told the justices that Roe and Casey “haunt our country,” have “poisoned the law,” and have “choked off compromise.” “Abortion is a hard issue,” he said, and it is a question that should be left up to the people to decide.

At least three justices – Thomas and Justices Samuel Alito and Brett Kavanaugh – appeared inclined to agree with Stewart and overrule Roe and Casey outright. Kavanaugh said that the Constitution does not directly address abortion and that the issue should instead be left to the democratic process. The court, he suggested, should remain “scrupulously neutral on the question of abortion — neither pro-choice nor pro-life.”

Kavanaugh later set forth a list of celebrated cases in which the court overruled prior decisions or announced new constitutional law. The cases he cited included Brown v. Board of Education, which outlawed racial segregation in public schools, Baker v. Carr, which helped enshrine the principle of “one person, one vote,” and Obergefell v. Hodges, which recognized the right to same-sex marriage. Describing those and other rulings as some of the “most consequential and important in the court’s history,” Kavanaugh said that if the court had simply adhered to its precedent, the United States “would be a much different place.” If we think that Roe and Casey are seriously wrong, he asked, why isn’t the correct answer to overturn them and “return to a position of neutrality?”

Alito pressed a similar point with U.S. Solicitor General Elizabeth Prelogar, who argued on behalf of the United States as a “friend of the court” supporting Jackson Women’s Health Organization, the only abortion clinic in Mississippi. Alito asked Prelogar whether the court’s infamous 1896 decision in Plessy v. Ferguson, holding that racial segregation laws did not violate the Constitution as long as “separate but equal” facilities were available, could have been overruled one year after it was handed down. When Prelogar agreed that it should have been, Alito seized on the concession. That means, he stressed, there are circumstances in which an “egregiously wrong” decision can be overruled even if the facts on the ground have not changed.

The court’s three liberal justices – Stephen Breyer, Sonia Sotomayor, and Elena Kagan – emphasized the importance of stare decisis, the principle that courts should adhere to prior precedent except under limited and extraordinary conditions. In particular, they stressed that overruling Roe and Casey would undermine the court’s legitimacy by creating the sense that the meaning of the Constitution hinges on the court’s membership at any particular moment in time. Sotomayor made the point most explicitly, noting that sponsors of the Mississippi ban had drafted the bill in response to changes in the Supreme Court’s membership.

“Will this institution survive the stench that this creates in the public perception – that the Constitution and its reading are just political acts?” Sotomayor asked. “I don’t see how it is possible.”

Breyer and Kagan echoed Sotomayor’s sentiments, although in slightly less stark terms. Breyer cited Casey itself, which said that overruling prior precedent in response to social or political pressure would “subvert” the court’s legitimacy. And Kagan emphasized the importance of stare decisis to prevent people from thinking that the Supreme Court is a political institution.

Kagan also addressed Roe and Casey head-on. Overturning those rulings, she said, would require a “strong justification” that, in her view, simply doesn’t exist. “Not much has changed” in the nearly 50 years since Roe and the 30 years since Casey, except that there have been numerous decisions reaffirming Roe and Casey, along with decades of reliance by women in the United States on those decisions, Kagan said.

Chief Justice John Roberts appeared ready to uphold the Mississippi law, but he focused primarily on the 15-week ban, rather than on the bigger question of whether to overrule Roe and Casey entirely. Roberts, who in 2020 voted to strike down a restrictive Louisiana abortion law on the ground that it was virtually identical to a Texas law that the court had invalidated four years earlier, observed that the viability line was not directly at issue in Roe. Indeed, he noted, the papers of Justice Harry Blackmun, the author of Roe, indicated that Roe’s reference to viability was “dicta” – that is, only an incidental remark and not precedent.

Roberts also suggested that 15 weeks would be enough time for women to decide whether to obtain an abortion. If the case boils down to having a meaningful choice to terminate a pregnancy, then “why would 15 weeks be an inappropriate line?” he asked Julie Rickelman, who argued on behalf of the clinic. “Viability, it seems to me, doesn’t have anything to do with choice,” Roberts continued. “If it really is an issue about choice, why is 15 weeks not enough time?” His comments suggest that Roberts, at least, may be considering a ruling that nominally keeps Roe and Casey in place but scraps the viability line and allows states to prohibit abortions earlier in pregnancy than is currently permitted.

Roberts would likely need support from Justice Neil Gorsuch or Amy Coney Barrett for a controlling opinion that stops short of formally overruling Roe and Casey. But Gorsuch and Barrett did not tip their hands as clearly as Kavanaugh on Wednesday. All three were appointed by former President Donald Trump, who promised as a candidate that he would nominate justices who would overturn Roe.

Barrett posited that “safe haven” laws, which allow parents to give up their newborns at designated safe places, might help to ease the burdens of parenting, which both Roe and Casey emphasized – a comment that might signal that she regards the premise of Roe and Casey as having changed. Perhaps thinking of the broader implications if the court were to overturn Roe and Casey, Barrett also asked Stewart whether a ruling in his favor would call into question other landmark decisions, particularly those based on a fundamental right to privacy – for example, decisions establishing the right to same-sex marriage and the right of married couples to buy and use contraceptives.

Gorsuch asked Rikelman to respond to Mississippi’s argument that Casey’s “undue burden” standard, which courts apply to abortion regulations before viability, “has proved difficult to administer.” Under stare decisis principles, that could weigh in favor of overruling Roe and Casey, Gorsuch said. And he asked both Rikelman and Prelogar whether the court could apply the undue-burden standard to prohibitions on abortion before viability. Rikelman responded that it would not be a workable standard, later telling Alito that it “would be the equivalent of overruling Roe and Casey because the viability line is the central holding of those cases.”