French President Emmanuel Macron has said Europe and the US should urgently allocate up to 5 per cent of their current vaccine supplies to developing countries where Covid-19 vaccination campaigns have scarcely begun and China and Russia are offering to fill the gap.

In a Financial Times interview by video link from the Elysée Palace, Macron said African nations were sometimes buying western vaccines such as those made by AstraZeneca at “astronomical prices” — two or three times the price paid by the EU — and being offered Chinese and Russian vaccines of uncertain efficacy against new variants of the virus.

“We are allowing the idea to take hold that hundreds of millions of vaccines are being given in rich countries and that we are not starting in poor countries,” he said ahead of a G7 meeting by video link on Friday of the leaders of the world’s biggest economies called by UK prime minister Boris Johnson. 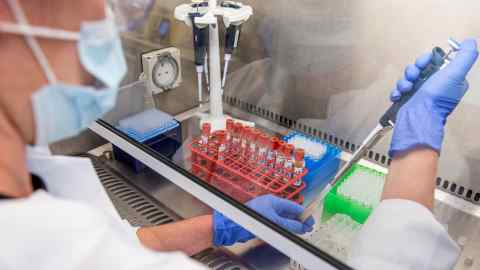 “It’s an unprecedented acceleration of global inequality and it’s politically unsustainable too because it’s paving the way for a war of influence over vaccines,” Macron said. “You can see the Chinese strategy, and the Russian strategy too.”

The French president said it was crucial for pharmaceutical groups making vaccines to transfer technology abroad in order to accelerate global production of vaccines — “we will apply all the pressure we can” — and to be transparent about pricing.

It won’t change our vaccination campaigns, but each country should set aside a small number of the doses it has

Macron acknowledged that the EU had been slower than the US at ensuring production and supply of vaccines for its own populations and was facing shortages, but said diverting a small share of the doses to Africa from European supply chains would not hinder vaccination campaigns.

“The key is to move quicker,” he said. “We’re not talking about billions of doses immediately, or billions and billions of euros. It’s about much more rapidly allocating 4-5 per cent of the doses we have.

“It won’t change our vaccination campaigns, but each country should set aside a small number of the doses it has to transfer tens of millions of them, but very fast, so that people on the ground see it happening.”

Macron said he had discussed the idea “a lot” with German Chancellor Angela Merkel. “She supports it and we are in agreement,” he said, calling for a “fully European and co-operative initiative” and adding that he hoped also to convince the US, where vaccine supplies are more plentiful than in the EU.

He said the plan would be a test of the reality of multilateralism. “It’s not about vaccine diplomacy, it’s not a power game — it’s a matter of public health,” Macron said, adding that he welcomed the global provision of Russian and Chinese vaccines provided they were certified by scientists for use against the appropriate variants of the virus.

“It’s unacceptable when a vaccine exists to reduce the chances of a woman or a man according to the place where they happen to live.”

While implicitly acknowledging that the rollout of vaccines to developing countries was a diplomatic battle that western countries were currently losing, Macron said it was in the interest of all countries that wanted their borders to remain open to extend vaccination programmes beyond their home territory.

“It’s in the interest of the French and the Europeans. Today I have more than 10m of our fellow citizens who have families on the other side of the Mediterranean,” he said.

Macron, whose government has been criticised for the slow rollout of vaccinations in France, insisted that transferring “3-5 per cent of the vaccines we have in stock to Africa” would have no impact on the domestic inoculation programme. “It won’t delay it by a single day given the way we use our doses.” France has promised vaccinations to all adults who want them by the end of the summer.

Without helping their neighbours around the Mediterranean and in the Middle East and the Balkans, European countries would never be able to reopen because they would end up reimporting Covid-19 variants resistant to their vaccines, he said.