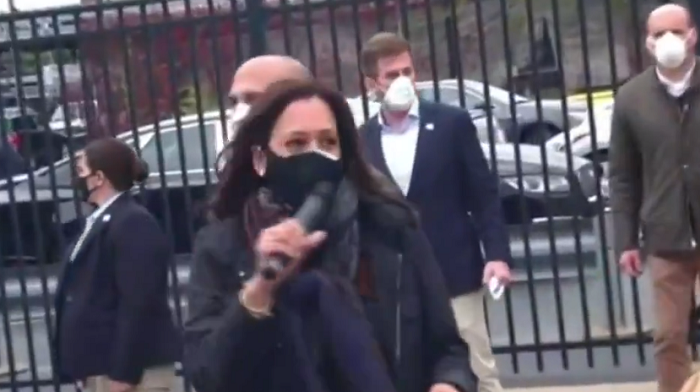 Vice presidential nominee Kamala Harris had to ask an aide if she was in the city of Cleveland before addressing a crowd of supporters this past weekend.

A hot mic caught her questioning a person standing alongside her, “Are we in Cleveland?”

Harris then turns back to the crowd and shouts, “Hey, Cleveland, it’s Kamala!”

It’s the kind of gaffe one has come to expect from her running mate, Joe Biden, but not the woman twenty-one years younger who may take over for him one day.

While Joe’s gaffes have more to do with his acuity, Harris is more likely a symptom of not caring enough to learn about the people she is speaking to.

A hot mic caught Kamala Harris asking staff “are we in Cleveland?” before she spoke.

RELATED: Jake Tapper Rips Trump Over Comments About The Black Community, Van Jones Fires Back ‘He Doesn’t Get Enough Credit’

What Kamala Harris Said In Cleveland

Despite not bothering to review what city she was in prior to appearing, Kamala Harris spoke of her concerns for the residents there.

Harris expressed empathy for the struggles of the middle class due to the coronavirus pandemic during her speech and urged voters to get out and cast their ballots in large numbers.

In a recent interview with ’60 Minutes,’ Harris was asked to comment on whether or not she believes the President is a flat-out racist.

“Yes, I do,” she replied. “You can look at a pattern that goes back to him questioning the identity of the first Black president of the United States.”

.@KamalaHarris on if she thinks @realDonaldTrump is a racist:

“Yes, I do. You can look at a pattern that goes back to him questioning the identity of the first Black president of the United States.” pic.twitter.com/H2Ddie7ooy

Harris repeated the oft-debunked Charlottesville hoax in her interview with ’60 Minutes’ as evidence that President Trump is a racist.

It’s such a tiresome hoax, that one grows weary from having to debunk it each and every time. But then, that’s what Harris and Biden want, and we’re not about to let them get away with it.

“You can look at Charlottesville, when there were peaceful protesters, And on the other side, neo-Nazis and he talks about fine people on either side,” Harris falsely claimed.

“Calling Mexicans rapists and criminals. His first order of business was to institute a Muslim ban. It all speaks for itself.”

Norah O’Donnell does not challenge Kamala Harris mischaracterizing the Charlottesville situation. She should have. Also, she did not challenge Mr. Biden’s claim that Putin is behind the Hunter Biden stuff.

In fact, in the span of 30 seconds, Harris lied three separate times. Are you wondering where all of the social media giants are with their ‘fact-checkers’ on those comments? We are.

The President specifically called out the bigots at the Charlottesville rally.

“I’m not talking about the neo-Nazis and the white nationalists,” Trump said at the time, “because they should be condemned totally.”

Here is the video of Trump saying it: “I’m not talking about the neo-Nazis and the white nationalists, because they should be condemned totally”

As for the claim that President Trump called “Mexicans rapists and criminals,” he did not.

What he was referring to at the time were “some” illegal immigrants coming into the country that do, in fact, have lengthy criminal records.

“When Mexico sends its people, they’re not sending their best,” then-candidate Donald Trump said in 2015.

And, of course, the President’s travel ban actually applied to a very low percentage of predominantly Muslim nations around the globe.

There was no religious discrimination in the travel ban.

In fact, the executive order read in part:

(iv) Executive Order 13769 did not provide a basis for discriminating for or against members of any particular religion. While that order allowed for prioritization of refugee claims from members of persecuted religious minority groups, that priority applied to refugees from every nation, including those in which Islam is a minority religion, and it applied to minority sects within a religion. That order was not motivated by animus toward any religion, but was instead intended to protect the ability of religious minorities — whoever they are and wherever they reside — to avail themselves of the USRAP in light of their particular challenges and circumstances.

The ban has always been about blocking nations who harbor and promote terrorist activity from infiltrating legitimate groups of refugees or immigrants to cause damage to our nation.

There are nearly 50 Muslim-majority countries on the planet – the ban pertained to but a handful.

In her visit to – where was it? – Cleveland, Harris also played fast and loose with the truth on the pandemic.

Ooops, she did it again. Kamala Harris again claims that two-thirds of the U.S Population has died in the last several months. #BidenBrain pic.twitter.com/5B9G2TCm6z

It’s almost as if lying comes naturally to her.