The Supreme Court heard oral argument on Monday in Federal Bureau of Investigation v. Fazaga, a lawsuit filed by three Muslim Americans alleging that the FBI and its agents discriminated against them based on their religion during a surveillance program in southern California. The question before the court is whether the case should be dismissed under the “state secrets” privilege, or whether – as the U.S. Court of Appeals for the 9th Circuit ruled – a provision of the Foreign Intelligence Surveillance Act allows it to go forward, but permits the trial judge to decide the merits of the case behind closed doors. After over two hours of debate, there was little support for the 9th Circuit’s decision, but the justices appeared divided on what path the litigation should take next.

Representing the FBI, Deputy Solicitor General Edwin Kneedler told the justices that the state-secrets privilege, which allows the government to withhold sensitive information in litigation, is “critical to safeguarding the national security.” The 9th Circuit, Kneedler said, ruled that Section 1806(f) of the FISA, which establishes a mechanism for a federal district judge to privately review surveillance information when a regular public hearing would harm national security, “displaces the state-secrets privilege and requires the district court to adjudicate the merits of” the plaintiffs’ claims using information protected by the privilege. But that provision, Kneedler explained, was intended to provide a “special mechanism for the suppression of evidence when the government seeks to use it against” someone. By contrast, he stressed, the government in this case is seeking “to prevent the use of information.”

Some justices were skeptical that the scope of Section 1806(f) was as narrow as Kneedler suggested. When Kneedler argued that the statute dealt with suppression, rather than the production, of information, Justice Elena Kagan asked, “Why isn’t it about both?” Although “a significant part of it is obviously about suppression” of evidence, Kagan noted, Congress might have also wanted to create a mechanism to deal with requests for sensitive information. 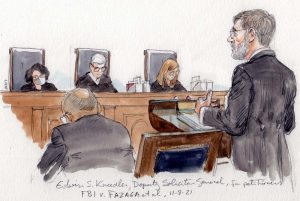 Arulanantham countered that the FISA was intended to address, in part, the persecution of religious minorities, and that Congress enacted the law against a “backdrop of abuses” that included surveillance of Martin Luther King Jr. and a Supreme Court justice.

Some of the court’s conservative justices were dubious that Congress would have enacted such a major change to the state-secrets privilege without doing so explicitly. Roberts observed that although Section 1806(f) “takes up the whole page,” “squirreled away in there are these few words that you’re relying on for displacement of the state-secrets privilege, for a reading of FISA that has enormous consequences for state secrets, for national security.” Why, Roberts wondered, “would Congress put such significant language stuck in this provision? Isn’t that an oblique way to have the consequences you’re ascribing to that language?”

Other justices were concerned about the impact of their ruling on the individual FBI agents whom the plaintiffs sued. Representing those agents, lawyer Catherine Carroll told the justices that it would be unfair to allow the plaintiffs’ claims to go forward under the 9th Circuit’s approach when the government’s assertion of the state-secrets privilege would prevent individual defendants from putting on a defense that rests on the privileged information.

Justice Samuel Alito was sympathetic. He described a scenario in which a judge determines behind closed doors that the FBI agents violated the plaintiffs’ religious rights as “the Star Chamber.” “How,” he asked Arulanantham, “can that possibly be consistent with due process?”

Arulanantham responded by suggesting that courts would also have to consider what he described as the “mirror image” of the scenario that Alito outlined: a situation much like his clients’ case, in which plaintiffs would have their claims dismissed without an opportunity for a jury trial or due process.

Alito suggested that Arulanantham’s scenario was different. With a question that prompted thoughts of last week’s oral arguments in the battle over Texas’s six-week abortion ban and the unusual mechanism that the state adopted to enforce the ban, Alito asked Arulanantham whether he thinks “everybody who is aggrieved and would like to bring suit has a due process right to bring that suit and recover.” But more broadly, Alito continued, if “this is the result to which” the plaintiffs’ argument leads, “isn’t that powerful reason for interpreting the statutory language differently?”

Justice Amy Coney Barrett was also receptive to this argument. She asked Arulanantham whether, if dismissal on state-secrets grounds is not a remedy, the individual FBI agents “go in with their hands behind their back and they are just sitting ducks?”

Alito and Justice Brett Kavanaugh found another fault with the 9th Circuit’s decision. Alito suggested that in some cases involving the state-secrets privilege, some evidence would be “too sensitive” even for a federal judge to review. It would create an “incredible security problem,” he contended, at district courts around the country.

Kavanaugh echoed this idea, telling Arulanantham that some information covered by the state-secrets privilege “is not the kind of information you want floating around” – even, said the former White House official, “in the White House.”

By the time the argument ended, the most likely scenario appeared to be that the case would return to the lower courts for additional proceedings, with some justices suggesting a path that would allow the Supreme Court to avoid deciding whether Section 1806(f) displaced FISA. The plaintiffs’ claims could still go forward for now, even if the 9th Circuit’s decision does not.

A decision is expected by summer.