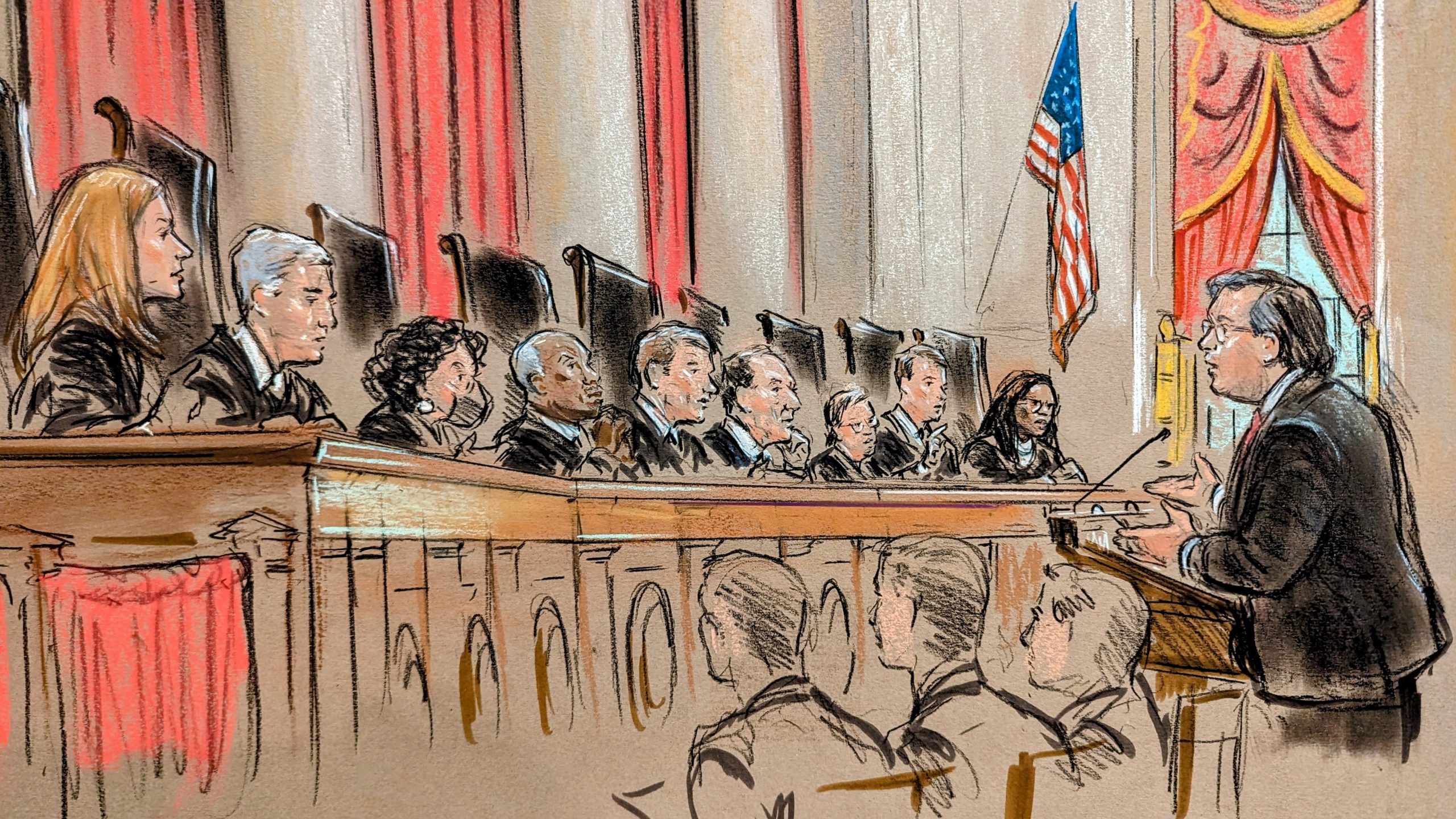 During Tuesday’s argument in Santos-Zacaria v. Garland, some justices seemed inclined to side with a woman who is facing deportation and wants to pursue her claim for humanitarian relief in a federal appeals court. The case may clarify thorny procedural questions about what hurdles a noncitizen must clear in administrative proceedings before getting into court.

Leon Santos-Zacaria is a transgender woman who entered the United States without authorization and fears persecution if she is forced to return to her home country of Guatemala. She asked the government to “withhold” her deportation for humanitarian reasons. Both an immigration judge and the Board of Immigration Appeals rejected her request. Appealing to the U.S. Court of Appeals for the 5th Circuit, Santos-Zacaria argued that the board violated Department of Homeland Security regulations by basing its decision on facts the immigration judge did not find.

A divided panel of the 5th Circuit dismissed her claim for lack of jurisdiction. Section 1252(d)(1) of the Immigration and Nationality Act states that a federal appellate court “may review a final order of removal only if … the [noncitizen] has exhausted all administrative remedies available to the [noncitizen] as of right.” Before seeking federal judicial review, the majority said Section 1252(d)(1) required Santos-Zacaria to exhaust her administrative remedies by filing a motion for reconsideration with the board. In other words, she had to give the board a chance to correct its mistake before seeking assistance from the court. Her failure to take this additional step, the 5th Circuit ruled, deprived the court of authority to hear her appeal.

The Supreme Court covered a few issues during the argument. The first was whether Section 1252(d)(1)’s administrative exhaustion requirement is “jurisdictional” or “procedural.” The government argued that the 5th Circuit lacked the statutory authority to hear Santos-Zacaria’s claims because she did not ask the board to correct its alleged impermissible fact-finding. Santos-Zacaria countered that the exhaustion requirement was simply a procedural step for processing claims that left the 5th Circuit’s appellate jurisdiction intact.

The justices’ questioning focused on how the Supreme Court’s recent jurisdiction jurisprudence applies to Section 1252(d)(1). The court has set a high bar for finding that a statute restricts the types of cases the federal judiciary can hear. While Congress need not use any particular term or phrase, it must clearly indicate its intent to limit the courts’ power. Further, statutory language directed at courts indicates its jurisdictional character, whereas statutory language directed at litigants indicates its procedural character.

Justices Samuel Alito and Brett Kavanaugh seemed especially interested in whether Section 1252(d)(1) clearly indicates Congress’s intent to limit the availability of appellate review. They questioned Santos-Zacaria’s counsel, Paul Hughes, on whether the provision could restrict review of the board’s decisions even though it does not contain the word “jurisdiction.” If not, they wondered whether Santos-Zacaria was insisting (contrary to the court’s recent cases) that Congress has to use “magic words” when limiting jurisdiction in the INA. Hughes responded that, whatever the general rule, Congress unambiguously limited jurisdiction in the provisions surrounding Section 1252(d)(1) but used different language in Section 1252(d)(1) itself. This contrast, he said, indicates that Congress did not consider the provision jurisdictional.

Alito and Kavanaugh further noted that some of Section 1252(d)(1)’s language appears directed at courts rather than parties, implying that Congress might have intended to strip courts of their jurisdiction when noncitizens fail to exhaust their administrative remedies. Justices Sonia Sotomayor, Elena Kagan, and Ketanji Brown Jackson highlighted the strangeness of this language. To varying degrees, they noted that it seemed to make the courts’ power depend on independent choices made by the noncitizens appearing before them. Hughes conceded that Section 1252(d)(1) is ambiguous on this point, as it apparently addresses both courts and noncitizens. But he emphasized that ambiguity favors his client. Unless the statute clearly limits jurisdiction, the court’s cases say it cannot be read as having that effect. When questioning the government later in the argument, Sotomayor, Kagan, and Jackson seemed to favor this view.

Moreover, Hughes observed that the court’s decisions consistently differentiate exhaustion requirements from jurisdictional limitations. Arguing for the government, Assistant to the Solicitor General Yaira Dubin similarly acknowledged that the court had not found exhaustion requirements to be jurisdictional in any of its recent cases. Kavanaugh accordingly suggested that the court should consider making this distinction explicit. Adopting a bright-line rule that exhaustion requirements are not jurisdictional unless Congress explicitly states otherwise might save the lower courts a lot of needless grief and confusion. Justice Neil Gorsuch likewise seemed inclined to definitively answer this question given how much the board and the appellate courts have struggled with it. Interestingly, Alito questioned whether the court has any authority to impose such a clear-statement rule on Congress. 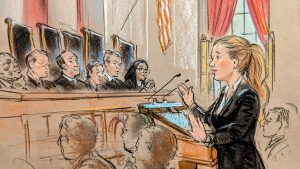 A second issue on which the justices focused was whether Section 1252(d)(1) required Santos-Zacaria to file a reconsideration motion with the board. Here, several justices appeared skeptical of how the government interpreted Section 1252(d)(1)’s phrase “as of right.” Dubin insisted that Santos-Zacaria had a “right” to file a reconsideration motion with the board, even though the board could deny it and refuse to hear the merits of her impermissible fact-finding claim. In turn, her failure to exercise this right left her impermissible fact-finding claim unexhausted. Chief Justice John Roberts observed that Santos-Zacaria had “an absolute right to file a motion for reconsideration” but wondered whether that is the “right” to which Section 1252(d)(1) refers. He questioned whether the provision refers to a right to file the motion or to have the board address a particular issue.

Jackson asserted that the government’s understanding of “as of right” seems contrary to common usage. She pointed out that unsuccessful district court litigants can seek review “as of right” in the appellate courts, meaning that the appellate courts must hear their claims. By contrast, certiorari petitioners to the Supreme Court may not seek review “as of right” because the court can refuse their requests. Jackson observed that a reconsideration motion to the board seems much closer to the latter review process than the former. Dubin responded that the board has less discretion to deny reconsideration motions than the court has to deny cert petitions. Whereas the latter is an exercise of pure discretion, she argued that the board could abuse its discretion by denying motions that follow required procedures. Such abuse would be an error on which a reviewing court could reverse the board. In other words (though the point is not entirely free from doubt), the government seemed to assert that Santos-Zacaria had some limited right to the board’s reconsideration.

This response raised another related question about how often noncitizens would have to seek reconsideration to exhaust their available remedies. Kagan asked whether the government’s position would require noncitizens to seek reconsideration in every case, not just when the board made a mistake. Gorsuch raised a related concern elsewhere in the argument about how many rounds of reconsideration were needed to satisfy the exhaustion requirement if the board continued to make mistakes. Dubin responded that reconsideration is only available as of right for errors the noncitizen has not already presented to the board. She argued that this view is consistent with general exhaustion doctrine, which guarantees agencies one opportunity to correct their mistakes. Taken together, she claimed that noncitizens would exhaust their remedies after filing one reconsideration motion. Kagan, however, expressed her doubts that this was the best reading of Section 1252(d)(1)’s language.

A final set of questions addressed whether the review scheme at issue requires exhaustion of specific issues in addition to exhaustion of remedies. Dubin argued that Congress requires exhaustion of the former because preserving well-defined issues is central to the adversarial scheme for resolving deportation cases. Without issue-specific vetting by agencies, the board could not competently resolve the high volume of immigration appeals it hears. Dubin likewise claimed reviewing courts would be unable to ensure uniformity, efficiency, and fairness in the immigration system without the clarity provided by issue-specific exhaustion.

Justice Amy Coney Barrett returned to this concern several times, seeking clarification on whether the court could adopt an issue-exhaustion requirement even if its reading of the INA excluded one. While Dubin answered in the affirmative, Hughes countered. He argued that even if an issue-specific exhaustion requirement makes sense in theory, the one advanced by the government would be highly unusual in practice. From his perspective, the government would couple its issue exhaustion with an obligation to return to the board before seeking redress in the appellate courts. This procedure, he argued, was not the one Congress adopted in Section 1252(d)(1).

It is hard to gauge how receptive the justices will ultimately be to the government’s reading of Section 1252(d)(1). But based on the questioning, it seems like the government is fighting an uphill battle. A few openly shared their skepticism. Gorsuch and Kavanaugh appeared open to a resolution that would hand the government a defeat but give more explicit guidance to the lower courts. If so, that might be enough to cobble together a majority for Santos-Zacaria.