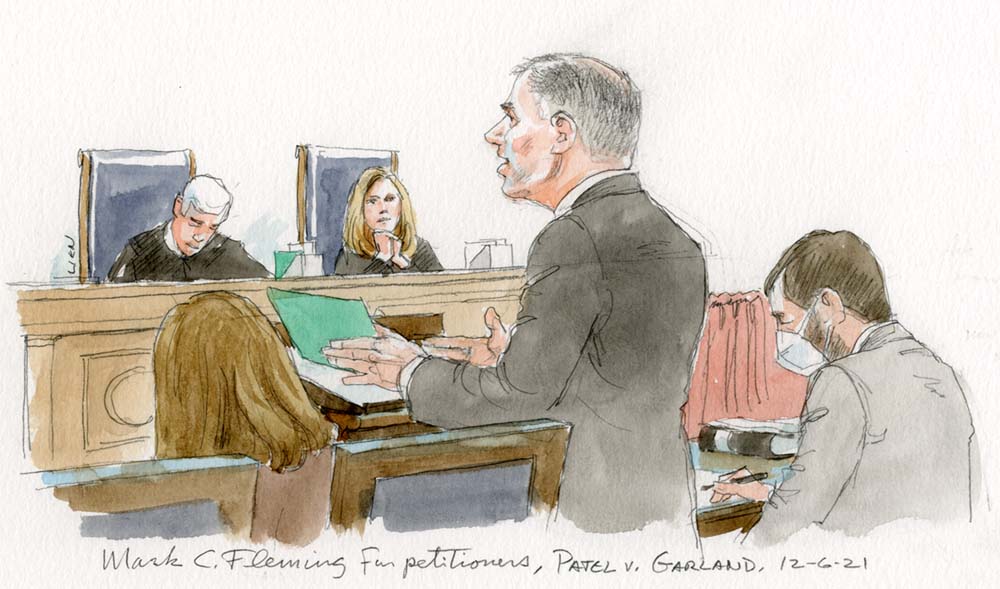 The Supreme Court on Monday heard oral argument in Patel v. Garland, an immigration case that raises a question about federal court review for noncitizens who were denied certain types of discretionary relief. For just over 90 minutes, the justices explored statutory text, legislative history, and the presumption of judicial review.

The case involves Pankajkumar Patel, a citizen of India who has lived and worked in the United States for nearly 30 years. Patel applied for “adjustment of status,” which allows a person to obtain permanent residency (i.e., a green card). Like with many forms of discretionary relief, adjustment of status involves two steps. First, the applicant must meet precise eligibility requirements under the statute. Second, immigration officials must exercise their discretion to grant the relief.

In 2008, Patel marked “U.S. citizen” when applying for a Georgia driver’s license. As a consequence, he was denied adjustment by an immigration judge in the Department of Justice based on a finding that he was “inadmissible.” The Board of Immigration Appeals upheld that finding. At the heart of this case is whether a federal court can review Patel’s statutory eligibility for adjustment of status. Enacted by Congress in 1996, 8 U.S.C. § 1252(a)(2)(B)(i) bars federal courts from reviewing denials of discretionary relief and specifically “any judgment regarding the granting of relief” under five specific immigration remedies, including adjustment. That statute is known as the jurisdictional bar.

Patel, represented by Mark Fleming, argues that the jurisdictional bar pertains only to the second-step discretionary decision. The government, represented by Assistant to the Solicitor General Austin Raynor, also argues that Patel’s case falls outside of the jurisdictional bar because the case involves a question of fact tied to statutory eligibility. Because the government largely agrees with Patel, the court appointed appellate litigator Taylor Meehan to argue the other side – namely, that the jurisdictional bar reaches Patel’s case because the factual question of whether he intended to misrepresent his citizenship on a driver’s license application is unreviewable. Meehan relies on 8 U.S.C. § 1252(a)(2)(D), a provision of a 2005 law known as the REAL ID Act, to argue that only questions of law or constitutional claims may be reviewed by a federal court. 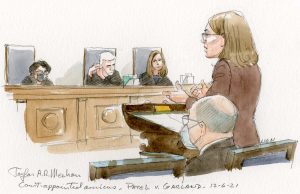 During Monday’s hearing, both Fleming and Raynor framed the difference between their arguments as largely analytical and one that does not affect Patel’s case. Justice Clarence Thomas viewed the language of the jurisdictional bar — “any judgment regarding the granting of relief” — as “pretty broad.” To explain why the jurisdictional bar is narrower, Fleming identified neighboring sections of the Immigration and Nationality Act, the use of “judgment” in administrative and immigration law, and contextual cues in the jurisdictional bar itself.

Justice Amy Coney Barrett raised Meehan’s argument that the jurisdictional bar “doesn’t have that much work to do” if all step 1 preliminary determinations are reviewable. Fleming responded by explaining how, prior to the jurisdictional bar, the courts reviewed step 2 decisions. Justice Samuel Alito seemed less convinced by the statutory arguments advanced by Fleming and asked for confirmation that ultimately, adjustment of status is a discretionary determination. Justice Sonia Sotomayor’s likely support for the statutory argument advanced by Patel and the government could be found in her expressed concern about Meehan’s reading of the jurisdictional bar. Sotomayor invoked “nearly 50 years” of immigration decisions by the Supreme Court. “All of them distinguish between eligibility and the step 2 discretionary determination,” she said.

Thomas questioned Raynor on whether Patel’s state of mind when he checked the U.S. citizen box on his driver’s license application was a finding of fact or a decision involving some discretion. Raynor responded that Patel’s subjective intent is a factual determination. Barrett pushed back to comment that there must be some judgment or discretion that the immigration judge used to decide if Patel was telling the truth when he testified that he checked the box by mistake. Raynor agreed that the question is more complicated but also explained how credibility determinations are treated as questions of fact.

Sotomayor viewed the question as more factual, commenting that a judge generally “gives reasons for why he thinks a person lies.” More inclined to separate the credibility question from the factual one, Kagan articulated Patel’s intent at the time he checked the box as a factual question irrespective of whether a judge found him credible. The fact that the immigration judge did not find him credible “does not make the findings any less factual.” Expressing some doubt, Chief Justice John Roberts questioned why choices about a person’s demeanor or nervousness would not involve discretion in deciding a factual issue — he seemed to take the view that discretion is involved in examining credibility.

Justice Stephen Breyer suggested that Patel’s position has “legal virtue.” “Step1/step 2 is at least comprehensible to an ordinary person and even to a judge,” he said. Breyer seemed critical of the government’s slightly different reading of the statute because there may be some other issues that might “fit within the government’s idea of special discretion or not,” leading to an exercise about what falls under step 1 and what falls under step 2. Kagan joined the conversation with her interpretation of Patels’s argument that any judgment in step 1 is reviewable and that only at step 2 is a decision unreviewable. Barrett shared some of Breyer’s concerns about the workability of the government’s position, namely deciding which kinds of decisions are discretionary versus non-discretionary.

Many of the justices weighed in on the role of the doctrine that agency actions are presumptively reviewable. Said Sotomayor in an exchange with Meehan: “I don’t know what to do with the presumption of favoring judicial review. That’s so well embedded in our jurisprudence. … This makes no sense to me. So, give me a reason why Congress would do something different in (B)(i) and (B)(ii).” Breyer had similar concerns with Meehan’s argument, concluding that “once we get the presumption of review, that sort of pushes against what was a good brief. I mean, that pushes the other way. … I think that presumption is tough for you.” Kagan, seeming to agree with Breyer, suggested that the presumption “doesn’t just disappear because we’re dealing with a review bar.” Meehan responded that once the court applies all the possible canons of statutory construction, it should conclude that the statute “must mean the overall denial of relief.” Roberts viewed the presumption of reviewability and the broad discretion by the attorney general in immigration matters as pulling in opposite direction. “Don’t those two presumptions kind of cancel each other out, and we’re left with just reading the statute as it’s written?” he asked.

Sotomayor raised the “immediate consequences” when adjustment of status is denied, including the ability for a person to work and to sponsor family members to apply for citizenship. “There are a lot of consequences to not having immediate review,” she said. Indeed, this case will have consequences for Patel and his wife and for the future of judicial review.

Judging the outcome by oral argument is a challenging task. With that said, based on the questions and concerns raised, Breyer, Sotomayor, and Kagan seem strongly poised to support either Patel or the government’s reading of the statute, with potential support by several conservative justices. If so, Patel would be able to have a federal court review the finding by immigration authorities that he is ineligible for adjustment of status. Roberts and Alito seemed most likely to dissent.