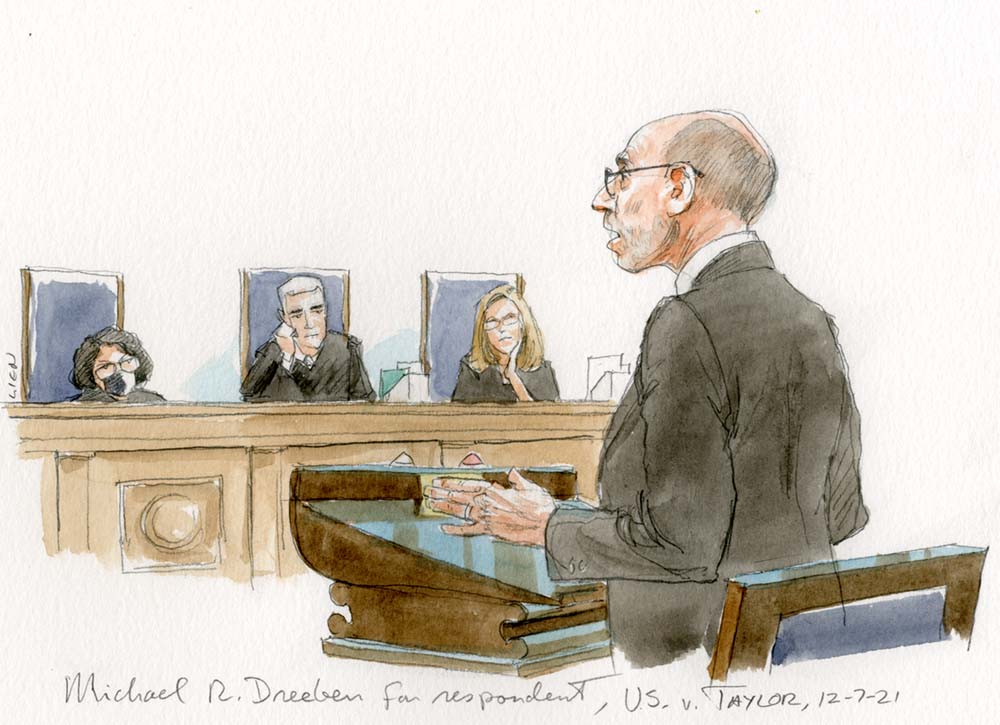 Mind-reading police officers, guns made of marshmallows, and a Woody Allen mockumentary all made rhetorical appearances during Tuesday’s argument in United States v. Taylor, a case about how to define a violent crime. But after 90 minutes of debate, none of the analogies, no matter how fanciful, seemed much help as the justices struggled to solve a statutory puzzle involving attempted robbery, threats of violence, and two federal laws with expansive language.

In the end, the case may turn on a question that seems more philosophical than legal: Is it possible for a would-be criminal to attempt to threaten physical force but stop short of making any actual threat?

The answer could determine the scope of a federal criminal statute that punishes carrying or using a gun during a “crime of violence.” The statute, 18 U.S.C. § 924(c), defines “crime of violence” as any felony that involves “the use, attempted use, or threatened use of physical force.”

James Eugene Taylor was sentenced to 10 years in prison for violating Section 924(c). Taylor’s underlying “crime of violence,” the government says, is attempted robbery under a separate statute known as the Hobbs Act. The Hobbs Act defines robbery as taking another person’s property through “actual or threatened force.”

Michael Dreeben, arguing for Taylor, provided a hypothetical example to show why the lower court was right. Imagine a person planning to rob a convenience store, Dreeben told the justices. He plans to hand the cashier a threatening note but not to use any force. He writes the note and drives to the store, but when he sees police in the area, he leaves the scene. He is guilty of attempting a robbery because he intended to steal property through the threat of force, and he took a “substantial step” to carry out the plan. But, Dreeben said, his actions don’t rise to a “crime of violence” because he never used force or attempted to use it – and he never reached the point of threatening to use it, either.

Several justices posed their own similar hypotheticals suggesting sympathy to the idea that — at least as a theoretical matter — certain attempted robberies might not meet the definition of “crime of violence.” Justices Stephen Breyer and Elena Kagan imagined scenarios involving fake guns, which in Breyer’s telling might be purchased from Amazon and fashioned from either wood or marshmallows. Chief Justice John Roberts recalled a scene from the 1969 film Take the Money and Run involving a hapless bank robber with illegible handwriting.

The hypotheticals are important because, in deciding whether a crime meets a statutory definition of “crime of violence,” the court uses a method known as the “categorical approach,” which does not depend on the defendant’s specific conduct. Under the approach, the court examines only the abstract legal elements of the crime — which often means analyzing various ways the crime could conceivably be committed.

Arguing for the government, Assistant to the Solicitor General Rebecca Taibleson pushed back, saying the meaning of the statute should not depend on “legal imagination.” Hypothetical examples involving unrealized “attempts” to commit robbery through unexpressed threats, she said, are far-fetched or could never be prosecuted under the Hobbs Act in the first place. And she invoked a movie of her own: a 2002 dystopia from Steven Spielberg in which authorities know in advance what crimes someone might attempt.

“We don’t need to pretend that we live in the movie Minority Report in which the government can prosecute pre-crime and thought crime and benign, private, preparatory steps,” Taibleson said. “That’s not how Congress writes laws, and that’s not how we interpret them.”

In practice, Taibleson continued, the government can prosecute attempted robbery under the Hobbs Act only if the defendant actually reached the point of threatening the use of force (or used it directly). That practical reality, she said, means that any attempted robbery under the Hobbs Act meets the definition of “crime of violence” under Section 924(c).

One long stretch of questioning involved four justices — Breyer, Kagan, Samuel Alito, and Amy Coney Barrett — pressing Taibleson on a question that Alito put most succinctly: “Is it a violation of the Hobbs Act if a person attempts to threaten but does not actually threaten?”

Taibleson’s answer did not seem to soothe the justices’ concerns. “I don’t think there is such a thing as a non-threatening attempt to threaten under the Hobbs Act, if that makes sense,” she said.

A few justices tried to steer the conversation from legal abstractions to the real world. Justice Clarence Thomas expressed skepticism about the “categorical approach” and wanted to focus on Taylor’s specific conduct: a botched robbery that ended in a fatal shooting. Justice Brett Kavanaugh suggested that limiting the reach of Section 924(c) would weaken the federal government’s ability to punish gun violence.

“Congress obviously did this and imposed this because there’s a huge problem with violent crime committed with firearms and thought that the sentences were not sufficient to protect the public,” Kavanaugh said.

But despite those comments, the justices and the advocates kept returning to the realm of the theoretical.

“There’s a bit of a ‘Through the Looking Glass’ feel to this case,” Thomas commented at one point.

“I couldn’t agree more,” Taibleson responded. “It’s almost like angels dancing on the head of a pin.”