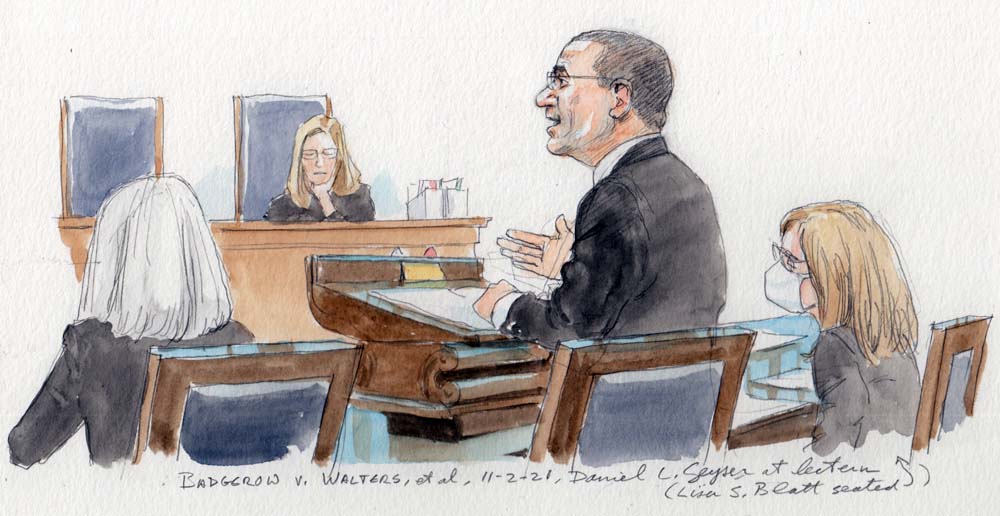 You might have expected the justices to take a breather the day after hearing the weighty arguments in United States v. Texas and Whole Woman’s Health v. Jackson. Especially for an argument about the details of federal jurisdiction over efforts to confirm or vacate an arbitration award. But in Badgerow v. Walters on Tuesday, the bench was engaged as the justices struggled to find a way to match the text of the Federal Arbitration Act with a palatable jurisdictional framework.

The basic problem is that the FAA creates some important substantive rules about arbitration, but it doesn’t speak very clearly about the extent to which federal courts are available to enforce those rules. The most important rule probably is Section 4, which makes it difficult for a party that has signed a pre-dispute arbitration agreement to avoid arbitration. The Supreme Court has heard many cases under that provision in recent years, frequently reversing lower courts for not reading Section 4 as broadly as the justices. Another important rule is the framework for confirming or vacating an arbitration award; Sections 9 and 10 of the statute set out rules for that process, which generally make it easy to get an award confirmed by a court.

Section 4 specifically states that a party seeking to enforce an arbitration agreement – seeking an order that would compel arbitration – can file in any court that would have jurisdiction over the underlying dispute. If the dispute involved federal law or parties from different states, a federal court would be available. In most cases, though, that approach – which “looks through” to the underlying dispute – would leave state courts as the only option. Sections 9 and 10, by contrast, don’t say anything at all about whether the party seeking to confirm (or vacate) the order can file in a federal court.

To understand the problem, consider the present case, a dispute between a former employee (Denise Badgerow) and the principals of the business that fired her (Greg Walters, among others). A federal court compelled Badgerow to arbitrate; since she lost the arbitration several years ago she has been trying to get a court to vacate the arbitration award against her. Because Walters already has procured a federal-court order confirming the award, Badgerow seeks a ruling that federal courts are powerless to issue those orders, so she can pursue the matter in state court.

To support that argument, Badgerow argues that the express authorization for federal filings in Section 4 implies that federal filings are not generally available in cases like this one (under Sections 9 and 10). Under that reading, actions to confirm or vacate an arbitration award would reach federal court only if the parties were from different states (i.e., diversity cases). By contrast, Walters argues that in all cases federal courts should “look through” to the underlying dispute, permitting federal authority at all stages of the controversy for disputes that arise under federal law. Because the dispute between Badgerow and Walters involves claims of gender discrimination under federal law, that rule would bring efforts to confirm or vacate the Badgerow award into federal court.

Daniel Geyser’s appearance (on behalf of Badgerow) was dominated by practical concerns about his reading of the statute. Justice Elena Kagan, for example, found it “a little backwards,” because “you put diversity cases in the federal court system and you take all the cases that involve federal questions and say, oh, the federal courts don’t have anything to do with those cases?”

In the same vein, Justice Stephen Breyer posited an “arbitration rat,” who “hates” arbitration, and suggested that the arbitration rat would “express his ratitude in many different ways” – by opposing arbitration; by bickering about the process; and by objecting to any award issued against him. Having seen many such litigants in the court’s cases, Breyer said that “it doesn’t seem to make very much sense to say” that a claimant can go to federal court to get an injunction to compel arbitration but not to get an order confirming the award.

Justice Brett Kavanaugh underscored the concern, suggesting it was particularly problematic that state courts would not apply the standards Section 10 sets forth that make it difficult to vacate arbitration awards. Kavanaugh suggested that it would “make sense to have a uniform … way to think about jurisdiction,” and that the most obvious way “always has been [that] you look through to the underlying controversy. It’s pretty simple, and you do that kind of all the way through.”

That is not to say that the justices took it easy on Lisa Blatt (appearing for Walters). Chief Justice John Roberts, for example, pressed one of his most common concerns, about overloading the dockets of the lower federal courts, as he suggested, from “the 30,000 feet perspective, [that] the consequence of your position is to federalize a lot more of FAA actions [and] procedures.” Blatt explained that her rule would only bring enforcement of the small share of arbitration cases (like this one) that involve federal-law controversies, but it was not at all obvious that her answer satisfied Roberts.

Again, returning to the point at the end of the argument, Kagan acknowledged “a set of arguments one can make on both sides about what would make for a sensible act, so if we were writing the act from scratch how would we write it.” She went on, however, to emphasize that she has “to put those arguments aside and say that we’re trying to make sense out of the actual language that Congress offered.”

As I’ve tried to suggest, several of the justices came to the bench well-prepared for discussion – Kavanaugh had a lengthy interchange with Geyser about the significance of a law review article from the 1920s – and none of them expressed a lot of certainty about the outcome. So, although practical concerns with Geyser’s position trouble some of them, it is far from obvious how this one will land when they get down to parsing the statute.