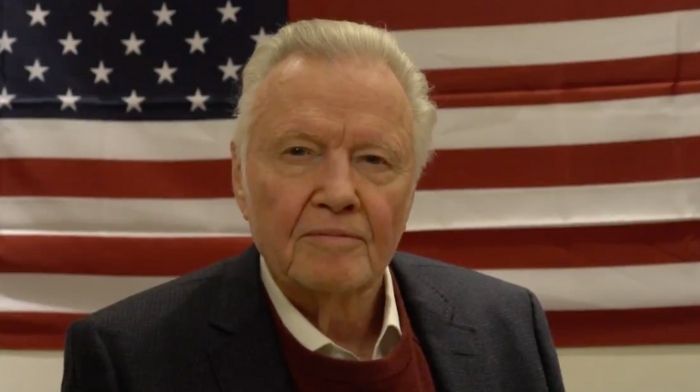 The Academy Award-winning actor Jon Voight is defying the liberal world of Hollywood to praise President Donald Trump days after the Capitol riots.

“My fellow Americans,” Voight said in a video posted to Twitter. “We shall not weep, but let us give thanks to President Trump for his four years of hard work and love for America. Let us not put our heads down, let us rise and look to a better future. Let us praise God. Let us understand that His plan is far greater.”

He went on to directly mention the riots that took place this past Wednesday, when supporters of President Trump stormed the Capitol building.

“I know all are disappointed, but this violence is not who we are,” added Voight, 81. “We are love, respect, honor. The ones who destroyed will be accountable but the ones who truly wanted to share love and respect will be heard.”

Related: Jon Voight Slams Dems – Says They ‘Are Evil, Corrupt…They Want To Tear Down This Nation’

Voight concluded by offering a message of unity at a time when America is more politically divided than ever before.

“Let us put aside our differences and let America grow,” he said. “Let us stand again with pride and we as a nation will hold on to the love that President Trump shared with us all. It’s not over. The truths of justice will prevail for God’s glory shall as well. Love to you.”

Voight has long been one of the few actors in Hollywood who is brave enough to support President Trump publicly. Back in November, he posted another video in which he went so far as to describe Trump as “the only man that can save this nation.”

“The left are burning and destroying our cities. We are willing to fight for freedom, not freedom to burn down our flag but to raise her up with the glory of this land of the free,” he explained. “Let the truth show itself that President Trump is the only man that can save this nation.”

Voight went on to urge his followers to pray “in the name of Jesus, Moses and all saints for their hands of safety to be honest now.”

Read Next: Jon Voight Defies Hollywood To Torch The Left – Says Trump Is The ‘Only Man Who Can Save This Nation’

This piece was written by James Samson on January 10, 2021. It originally appeared in LifeZette and is used by permission.