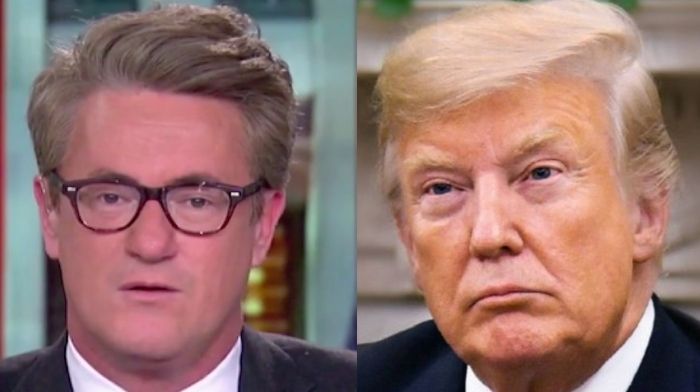 After calling out McCarthy, Sen. Lindsey Graham (R-SC) and former United Nations Ambassador Nikki Haley for wanting to keep meeting with Trump, Scarborough questioned how “sick” and “gutless” the GOP is to still support the former president.

“And Donald Trump refused to do it. And when Kevin got angry, Donald Trump said, well, I guess those attackers, I guess they’re more upset about the election than you are, Kevin,”  the MSNBC host continued.

“And McCarthy goes to the floor attacking Donald Trump. And then, like Lindsey Graham … gets scared — scared of his own shadow — and flies down to Mar-a-Lago and takes pictures with Donald Trump,” he added.

“It’s just like Nikki Haley,” Scarborough said. “She dares to tell the truth about him for about three seconds, and now she’s going to try to get back in with Donald Trump because he’s refusing to meet with her at Mar-a-Lago.”

“It’s extraordinary that these people want to meet with a man … Donald Trump, in case you haven’t been watching lately, the guy on the left led an insurrection against the United States Capitol where his own vice president was being shouted at with chants of ‘Hang Mike Pence!’” he continued.

‘Senator Ben Sasse said he got reports from inside the White House, inside the Oval Office, that Donald Trump was gleefully looking at terrorists abusing police officers with American flags,” he said.

“So, my question really is how sick does a political party have to be? How gutless and directionless does a politician have to be to actually want to be within 100 miles of that guy on the left who … will forever be remembered as the only president ever to call for an insurrection against the United States of America to try to stop a peaceful transition of power and to stop the constitutional process of counting electoral votes,” he concluded.

Read Next: Joe Scarborough Rips ‘Trump Cult’ – Tells Them To Get Help From ‘Mental Health Providers’ Instead Of Church

This piece was written by James Samson on February 27, 2021. It originally appeared in LifeZette and is used by permission.

Read more at LifeZette:
Anti-Trump GOP Rep. Kinzinger In Trouble In Illinois
Mitt Romney Hits Back At Biden Nominee Who Called For ‘Common Ground’ On Partial-Birth Abortions
Joy Behar Calls For Trump And Kavanaugh To Be Investigated If Cuomo Is To Be Probed