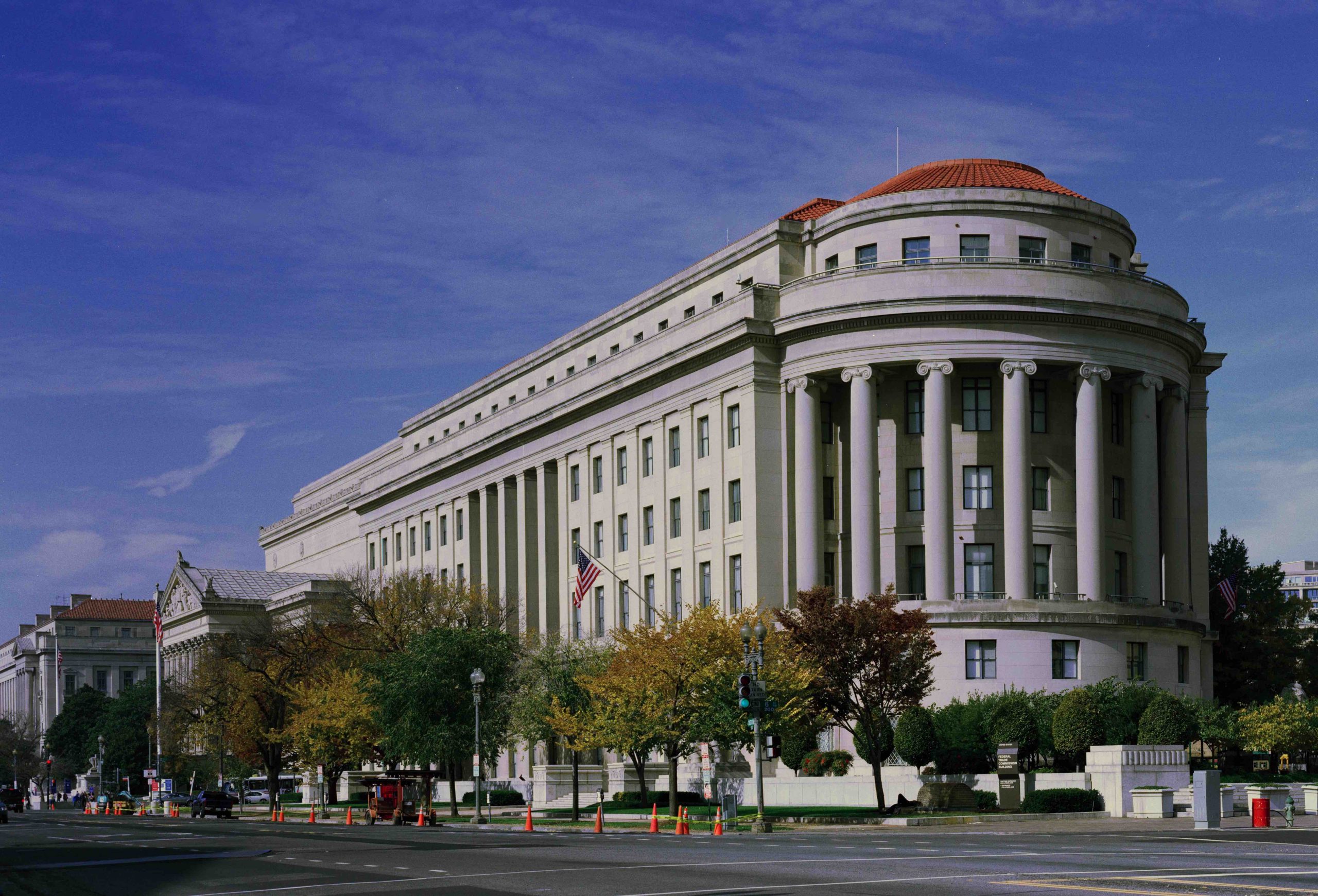 The headquarters of the Federal Trade Commission, one of the agencies involved in a pair of cases being heard on Monday. (Carol M. Highsmith via Wikimedia Commons)

In both cases, the targets of agency proceedings want to challenge the legitimacy of those proceedings right away in federal court, rather than having to await the outcomes of long-running administrative processes before getting their day in court. The first case involves Axon Enterprise, an Arizona company that makes police body cameras and other technology products for law enforcement. Axon has been mired in FTC investigations and proceedings since it purchased a competitor in 2018. It sued in a federal district court, arguing that the FTC’s proceedings are unconstitutional both because the method of appointing ALJs (administrative law judges) violates the Constitution’s appointments clause and because the combination of investigatory, prosecutorial, and adjudicatory functions offends the due process clause. Eventually, the court of appeals (the 9th Circuit in this case) dismissed the case, holding that challenges to agency proceedings can be made only by a petition for review in the court of appeals after the conclusion of the agency action.

The other case involves administrative proceedings that the SEC instituted in 2016 against Michelle Cochran, a certified public accountant, challenging her role in audits of public companies conducted by her former employer. The ALJ imposed a substantial monetary penalty and barred her from practice before the SEC, but the decision was vacated after the Supreme Court ruled in Lucia v. SEC that the ALJ’s appointment was unlawful. When the SEC instituted a new proceeding against her, Cochran sued in a federal district court, raising claims much like those of Axon – contending that the process of appointing the SEC’s ALJs remains unconstitutional, and that the concentration of functions (with the SEC acting at once as “judge, jury, and prosecutor”) deprives Cochran of due process. In Cochran’s case, though, the court of appeals (the 5th Circuit) agreed that the suit could proceed. Faced with conflicting results in cases that involve similar challenges and substantively identical schemes, it was almost inevitable that the Supreme Court would grant review.

The arguments of Axon and Cochran are powerful primarily because they are so simple. The general federal jurisdiction statute (28 U.S.C. § 1331) grants federal district courts “original jurisdiction of all civil actions arising under the Constitution of the United States.” The claims in both cases rest directly on the Constitution. The only statutes to which the United States can point as vitiating that general grant of jurisdiction are the statutes that allow parties to “obtain a review of [a final agency] order in the court[s] of appeals,” which have “exclusive” jurisdiction “to affirm, enforce, modify, or set aside [the] orders.” Because those statutes grant jurisdiction to the courts of appeals, nothing in them directly limits the jurisdiction that Section 1331 grants the federal district courts. The government, then, must establish that the structure of appellate review of final agency action implicitly bars preliminary challenges in the district courts.

The government’s explanation, at bottom, is twofold: first, that federal district courts have never enjoined agency proceedings under statutory schemes like these (which are common), and second, that there is every reason to think that these challenges could be included in a proceeding challenging any final order that the agencies might enter. Indeed, Lucia was such a case. Axon and Cochran note several problems with that approach. The most obvious is a case that looks a lot like this one – Free Enterprise Fund v. Public Co. Accounting Oversight Board – in which the Supreme Court approved an action in federal district court raising an appointments clause challenge notwithstanding the availability of review in the court of appeals at the conclusion of the proceeding. The 5th Circuit, for example, thought Free Enterprise Fund was “squarely on point.”

Another problem is how the poor fit between the model for review of agency action – a proceeding based on an administrative record focused on the final agency order – and the claims at issue here. Neither Axon nor Cochran is complaining about an agency ruling against them. In fact, their briefs are supremely confident in the assertion that there is no basis for a ruling against them. What they challenge is the process they face in presenting their claims of innocence. So the government’s response that Axon and Cochran could simply go along with the ordinary regime and bring their structural claims together with a challenge to a ruling against them rings hollow. For one thing, if Axon and Cochran ultimately prevail before the agency, there will be no order for them to challenge. More broadly, relief that invalidates an agency order at the end of the proceeding will never restore the time, resources, and energy consumed in the allegedly unlawful process. That point is made most tellingly in Cochran’s case: She’s already won on that route once (after Lucia) and she’s still at the SEC in litigation four years later.

It is always possible that the justices will take a cautious and incremental approach, reluctant to upset the traditional path of agency review. Some observers may think, though, that the tenor of the big decisions from last term suggests a court likely to reach out to accept challenges like the ones presented here. My guess is that the answer will seem pretty clear by the conclusion of the arguments on Monday.