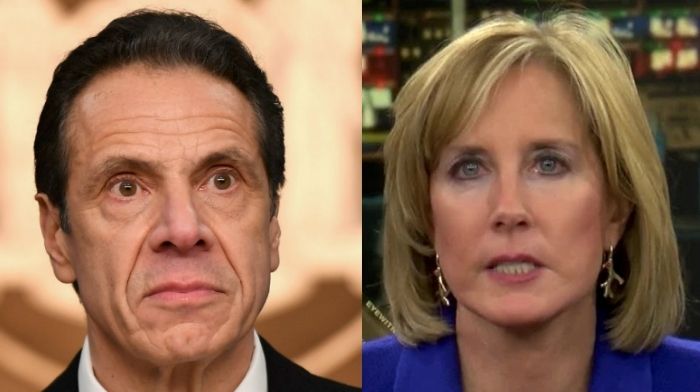 Rep. Claudia Tenney (R-NY) spoke out on Friday to slam New York Governor Andrew Cuomo for the way he is defending his handling of nursing home patients amid the COVID-19 pandemic in 2020.

Tenney told Fox News that there is no “bigger pay-to-play politician” in New York’s capital city than Cuomo, and to say that it is good to see him finally face scrutiny.

“This is vintage Cuomo,” she said. “This is how he always sounds. He’s bullying. He’s pointing fingers. He’s blaming other people. He’s accusing other people incredibly, being political, and engaging in pay-to-play as he accused Assemblyman Ron Kim. There isn’t a bigger pay-to-play politician in Albany than Governor Andrew Cuomo.”

‘He has been at this for a long time,” Tenney added. “I got elected to the state assembly in 2010 — the same time he got elected as governor. It has been one abuse of power after another, whether we look at the startup New York, which ended up his — one of his best friends who he called his third brother, [Joseph] Percoco, went to jail. There were problems over the Buffalo Billion. There are all these different issues.”

Related: AOC Turns On Cuomo – Calls For Investigation Into His Nursing Home Scandal

“And then we lead to the nursing home scandal,” Tenney continued. “And actually, I was very active on this in March of this year, and I put out a request and a letter to the Department of Justice to Attorney General Barr and asked the Inspector General to look into this in April. And I renewed that call in that letter and — on May 6, and said we need to get down to this because I could see there was some kind of obstruction and cover-up by the Cuomo administration.”

“Thankfully, it was revealed on just a Zoom call. So, the governor this is — this is how Andrew Cuomo operates. He’s been doing this for 11 years,” she concluded. “The reason nobody really knows about this is because the Albany media has been mostly supportive of him. They have not criticized him. He hasn’t received the scrutiny until now.”

Read Next: Alec Baldwin: If Gov. Cuomo Threatened Democrats Over Nursing Scandal He ‘Should Resign’

This piece was written by James Samson on February 21, 2021. It originally appeared in LifeZette and is used by permission.

Read more at LifeZette:
How Do You Stop Murders In A Democrat City?
Michael Moore Launches Vile Attack On Rush Limbaugh – Adds ‘You Can’t Get More Stupid Than The State Of Texas’
Trump Turns Down Meeting With Nikki Haley After She Betrays Him – Meets With Steve Scalise Instead