A bird’s-eye view of the oral argument on the Voting Rights Act in Shelby County v. Holder in 2013. (Art Lien)

For 45 years, Arthur Lien witnessed, sketched, and recorded for posterity some of the Supreme Court’s most historic moments. His pencil-and-watercolor illustrations have the uncanny quality of transporting the viewer into the room at just the right time. An emphatic gesture from an oral advocate. A raised eyebrow from a quizzical justice. The fraught silence in the packed courtroom before a big opinion announcement.

Lawyers, journalists, and justices know him as Art, or as Court Artist. But in a sense, artist is a misnomer. 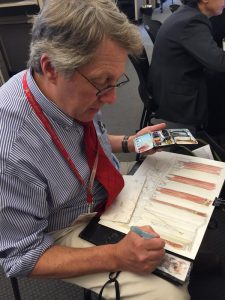 “I tend not to see myself as an artist at all,” he said recently. “I don’t think that’s my approach. Nor am I an editorial cartoonist. I’m more of a reporter. I’m reporting what I see. I’m trying to do it without injecting my own opinions.”

Art, an impeccable journalist with an artist’s skill, retired over the summer. He leaves us with a vast body of work — a visual, documentary record of one of the very few places in American public life where cameras cannot go.

The first Supreme Court argument Art ever sketched, as a recent graduate from the Maryland Institute College of Art, was in 1977. The argument was in University of California Regents v. Bakke, a landmark case in which the court upheld affirmative action (a precedent that is now in jeopardy in the upcoming term).

Some of the final work of Art’s career was his coverage of the case that ended the constitutional right to abortion, Dobbs v. Jackson Women’s Health Organization. Art recorded the marathon oral argument and the emotional protests after the court issued its decision.

Between Bakke in 1977 and Dobbs in 2022, Art captured countless other milestones, and lots of smaller moments, too. For nearly his whole career, he worked for NBC News. And starting in 2013, he worked for SCOTUSblog as well. For us, he didn’t just cover oral arguments, opinion announcements, and other courtroom scenes. He also developed the iconic banners — some whimsical, some beautiful, some poignant — that grace the top of our homepage.

With a new term about to begin, and without Art producing new pieces, SCOTUSblog is going to start to look a little different. (More details on that coming soon.) But Art’s work is timeless. With his help, we’ve collected a small sample of some of that work. (And you can see even more in our series of tributes to him.) 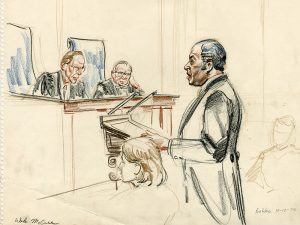 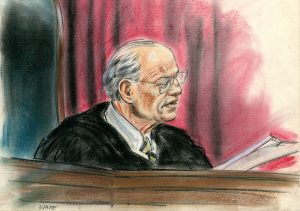 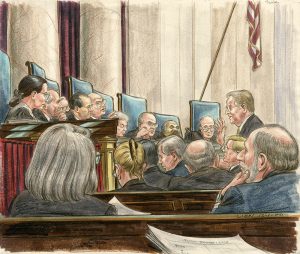 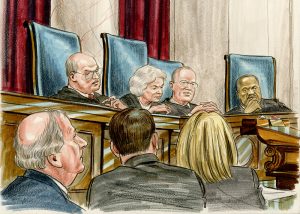 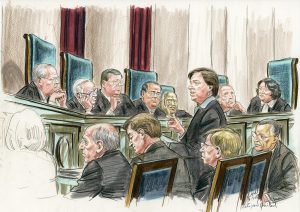 Elena Kagan, then the solicitor general, answers a question from Chief Justice John Roberts during the re-argument of Citizens United v. Federal Election Commission in 2009. 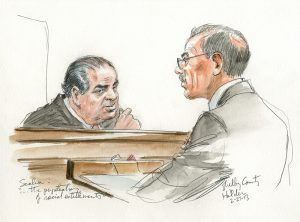 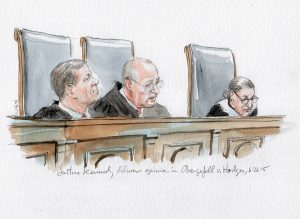 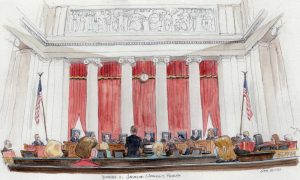 The court hears argument in Dobbs v. Jackson Women’s Health Organization in 2021 before a mostly empty courtroom due to COVID-19 restrictions. 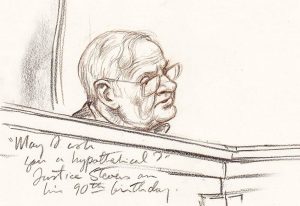 Justice John Paul Stevens asks a question on April 20, 2010, his 90th birthday. When he retired two months later, he was the second-oldest and third-longest-serving justice in history. 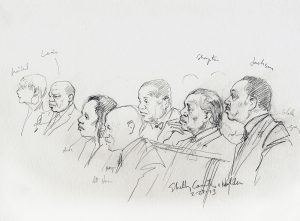 Leaders of the civil rights movement attend the Shelby County argument in 2013. 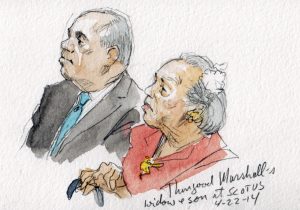 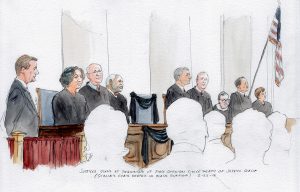 The justices stand at the beginning of the first session after Justice Antonin Scalia’s death in 2016. Black bunting adorns the bench and Scalia’s chair. 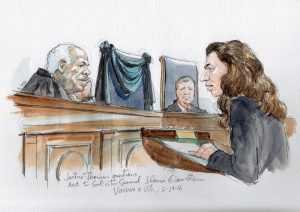 Breaking a 10-year span in which he did not ask any questions, Justice Clarence Thomas poses a question to Ilana Eisenstein in Voisine v. United States in 2016. 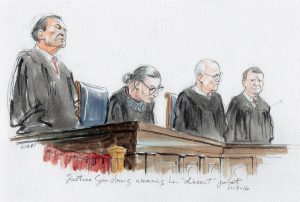 Justice Ruth Bader Ginsburg wears a “dissent” jabot during oral arguments on the morning after the 2016 presidential election.

The court in autumn.

A nighttime scene of the court.

The morning after the 2016 election.

Photography on the marble plaza, 2017.

The “Contemplation of Justice” statue overlooks D.C. during the summer 2020 protests following the murder of George Floyd.

Black bunting adorns Ginsburg’s chair after her death, and the bench remains empty during the pandemic.

The morning of the November 2020 argument on the Affordable Care Act in California v. Texas.

Protests on the day of the Dobbs v. Jackson Women’s Health Organization argument in December 2021.