The Supreme Court held on Thursday that in lawsuits brought against foreign sovereigns or their instrumentalities under the Foreign Sovereign Immunities Act, courts must apply the same choice-of-law doctrines – to determine what substantive law governs the claim — that would apply to similar suits against private parties.

Justice Elena Kagan authored the unanimous nine-page opinion in Cassirer v. Thyssen-Bornemisza Collection Foundation. As she noted, “[a]lthough the legal issue before us is prosaic, the case’s subject matter and background are anything but.” 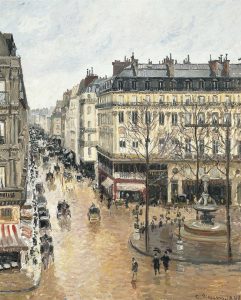 The case began when the Cassirer family sued a Spanish museum in California federal court to recover a Camille Pissarro painting that had been expropriated by the Nazis. After passing through a number of owners, the painting was purchased by the Spanish museum, an instrumentality of the Spanish government. (A picture of the painting, and a photograph of it hanging in the Cassirer home in Germany before it was stolen, are included in the appendix to the court’s opinion.)

After much procedural wrangling, a single question remained: Whose property law, Spain’s or California’s, should determine ownership of the painting? “Resolving that question required application of a choice-of-law rule — a means of selecting which jurisdiction’s law governs the determination of liability.” The Cassirers argued that California choice-of-law doctrines should apply. The museum argued that federal common-law choice-of-law doctrines should apply. The U.S. Court of Appeals for the 9th Circuit agreed with the museum, disagreeing with the four other circuits that had addressed the question. And it held that federal choice-of-law rules required the application of Spanish substantive law.

Kagan’s opinion holding that California (not federal) choice-of-law rules apply relied primarily on Section 1606 of the FSIA, which provides:

As to any claim for relief with respect to which a foreign state is not entitled to immunity … the foreign state shall be liable in the same manner and to the same extent as a private individual under like circumstances.

In addition, the court held, “even were Section 1606 not so clear, we would likely reach the same result, because we see scant justification for federal common lawmaking in this context.” That statement is in keeping with prior cases, which limit federal common law to a handful of circumstances in which the displacement of state law is “necessary to protect uniquely federal interests.”

The court remanded the case to the 9th Circuit “for further proceedings consistent with this opinion.” That means the 9th Circuit must now decide which jurisdiction’s property law a California state court would apply to this dispute.

But the most sensible course would be for the 9th Circuit to certify the choice-of-law question to the California Supreme Court – that is, formally ask the California court what jurisdiction’s law would apply in California state courts.

Unfortunately for the Cassirer family, although the Supreme Court’s unanimous decision in their favor is a small victory, it is unlikely to lead to the recovery of the painting any time soon … if ever. There will be more litigation, and if the 9th Circuit ultimately decides that a California state court would apply Spanish law to this case, the case will be over and the painting will remain in Spain.

Aside from resolving the “prosaic” legal question, the case is most notable for its unanimity, a rare occurrence in cases involving either choice-of-law issues or questions about federal common law. And it further cements Kagan’s reputation as the most careful proceduralist of the justices, as well as one of the court’s best writers.