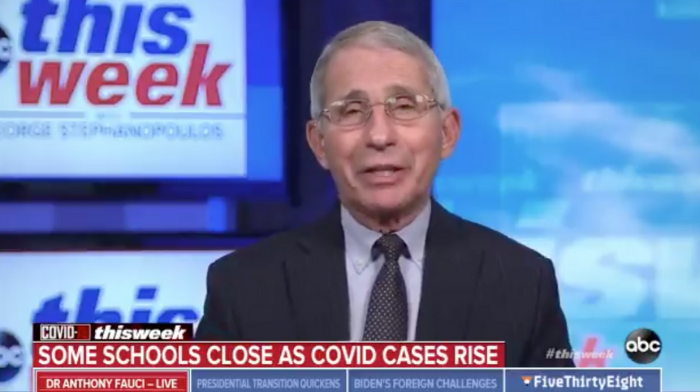 Fauci made his remarks during an interview with ABC News’ “This Week With George Stephanopoulos” hosted by Martha Raddatz.

“Close the bars and keep the schools open,” Dr. Anthony Fauci says, adding that while there is no solution that is “one size fits all,” the “best way to ensure the safety of the children in school is to get the community level of the spread low.” https://t.co/th9oAKhHYa pic.twitter.com/pDuTdQ0Vfp

“Martha, that’s a good question,” Fauci said in response to a question about school closings. “We get asked it all the time.”

“We say it not being facetiously as a sound bite or anything, but you know, close the bars and keep the schools open is what we really say,” Fauci said.

Fauci was talking about how a future Joe Biden administration could have a school reopening plan.

He also referred to the closing of New York City schools in November.

Fauci said, “Obviously, you don’t have one size fits all, but as I said in the past, and as you accurately quoted me, the default position should be to try as best as possible within reason to keep the children in school or to get them back to school.”

On Sunday, New York City Mayor Bill de Blasio said that middle and high school students would not be able to return to the classroom and must continue to learn virtually.

Reopen Schools! “Trump has been demanding for months that schools reopen, and on that he seems to have been largely right. Schools… do not appear to have been major sources of coronavirus transmission, and remote learning is proving to be a catastrophe” https://t.co/1YZZS7u94t

According to Fauci, reducing “the community level” transmission of coronavirus will “ensure the safety of the children in school.”

Dr. Fauci said, “So, if you mitigate the things that you know are causing spread in a very, very profound way, in a robust way, if you bring that down, you will then indirectly and ultimately protect the children in the school because the community level is determined how things go across the board.”

“So my feeling would be the same thing,” Fauci continued. “If you look at the data, the spread among children and from children is not really very big at all, not like one would have suspected.”

In the wake of this interview, Senator Rand Paul reminded Fauci that it has not always been clear about the doctor’s view on reopening schools.

I told him this multiple times this summer. https://t.co/LspBtxtU6D

Sen. Paul was raked over the coals by the media at the time for citing data that showed school re-openings would be safe.

“Shouldn’t we at least be discussing what the mortality of children is?” Paul asked Fauci during a Senate hearing in May, noting that the mortality rate of coronavirus patients age 0 to 18 “approaches zero” in New York.

Paul said not reopening schools in the fall would be “really ridiculous.”

The Washington Post called Paul’s views on the subject “weird.”

The Week’s Joel Mathis chided both Paul and Trump’s calls to reopen schools as unsafe.

Social media was littered with insults against Paul at the time.

@RandPaul Could you be any more Disrespectful and Despicable? My Lord, you even Look like a Lunatic🇺🇸 Rand Paul spars with Dr. Fauci, says economy and schools should reopen – Business Insider https://t.co/Td7yel0Zc0 pic.twitter.com/MYJyMkPjKs

Is the media going to attack Dr. Fauci now? Or accuse him of advocating for unsafe environments for school kids? Or insult him?

Nope, because the media and elites consider Dr. Fauci the be-all-end-all no matter what. For them, he is infallible.

That assumption could present a different kind of danger. Everyone makes mistakes.