The Supreme Court on Thursday night cleared the way for Alabama to carry out a lethal injection of an inmate who argued that he had the right to be executed by nitrogen hypoxia, a method that supporters say is more humane. In an unsigned order that divided the justices 5-4, the court lifted an order by a federal judge that would have required the state to use nitrogen hypoxia to execute Alan Eugene Miller. But the state called off Miller’s execution just before midnight, explaining that prison officials were unable to carry out the execution by lethal injection because it could not access Miller’s veins.

The court’s four female justices – Sonia Sotomayor, Elena Kagan, Amy Coney Barrett, and Ketanji Brown Jackson – dissented, indicating that they would have kept the lower court’s order requiring the state to use nitrogen hypoxia in place.

For over 20 years, the default method of execution in Alabama has been lethal injection. But in 2018, Alabama passed a law allowing inmates to opt instead for nitrogen hypoxia, a method in which an inmate would breathe pure nitrogen, depriving him of oxygen and leading to his death by asphyxiation.

Outside Alabama, two other states – Oklahoma and Mississippi – have also authorized nitrogen hypoxia as a method of execution. But nitrogen hypoxia has never been used to carry out an execution, and Alabama admitted in Miller’s case that it is not currently ready to do so.

The Alabama law authorizing nitrogen hypoxia gave inmates who had already been sentenced to death 30 days to elect nitrogen hypoxia as a method of execution. Miller, who in 2002 was convicted and sentenced to death for the fatal shootings of three men at the offices of his employer and former employer, contends that he filled out a form choosing nitrogen hypoxia and left it in a slot between the bars of his cell for prison officials to pick up. The state, however, counters that it never received the form, and it set his execution by lethal injection for Sept. 22. 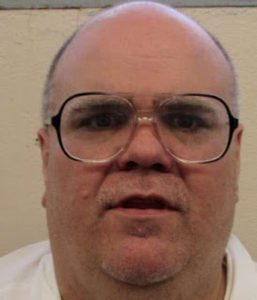 Miller went to federal court to block the state from using lethal injection to execute him. On Monday, U.S. District Judge R. Austin Huffaker Jr. granted Miller’s request. Siding with Miller on his assertion that he had submitted his form choosing nitrogen hypoxia on time, Huffaker barred the state from using any other method of execution.

The state went to the U.S. Court of Appeals for the 11th Circuit on Wednesday, asking that court to lift Huffaker’s order and allow the execution to go ahead as scheduled. In an unsigned 23-page opinion on Thursday, the court of appeals turned down the state’s plea. The state had not even tried to argue, the court noted, that it would be permanently harmed – one of the criteria for temporary relief – if the execution were put on hold. And in any event, the court added, it saw no reason to overturn Huffaker’s conclusions.

The state then came to the Supreme Court on Thursday afternoon, just hours before Miller’s scheduled execution. Describing Miller’s claims as “last-minute,” “meritless” and brought only to stave off his execution, the state urged the justices to block Huffaker’s order and allow the execution to proceed using lethal injection. The state asked the justices to act quickly because Miller’s execution warrant was set to expire at midnight Central time.

Miller urged the justices to leave Huffaker’s ruling in place. Alabama, he stressed, “has been saying throughout the litigation that it is very close to implementing a nitrogen hypoxia protocol.” Therefore, he reasoned, the state should be able to go forward with his execution, using the method that he chose, soon.

After getting the go-ahead from the Supreme Court, the state prepared to carry out Miller’s execution by lethal injection. But according to the Associated Press, the state called off the execution around 11:30 p.m. Central time. Alabama Corrections Commissioner John Hamm said that the execution was stopped once officials determined that Miller’s “veins could not be accessed in accordance with our protocol before the expiration of the death warrant” at midnight.