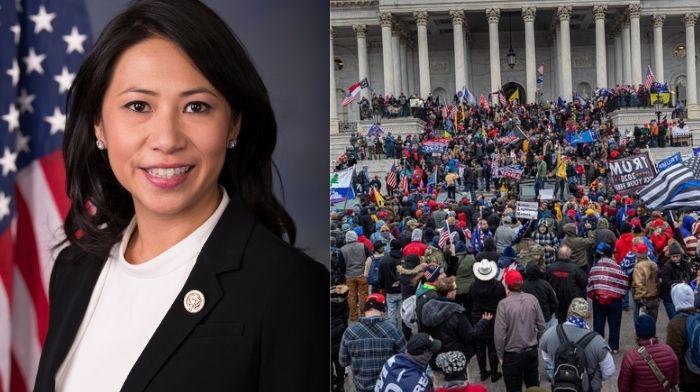 Democrat Florida Congresswoman Stephanie Murphy introduced legislation to bar anyone who participated in the violent protests at the Capitol on Jan. 6 or are adherants to the “QAnon” movement from obtaining or maintaining a federal security clearance.

While the bill has been introduced, Congress.gov maintains that no bill text has yet been received.

The Security Clearance Improvement Act of 2021 (H.R. 353) would add another question to the 130 page security clearance questionnaire, know as SF-86.

According to Murphy, the form will now ask “whether they have ever been a member of, associated with, or knowingly engage in activities conducted by an organization or movement – like QAnon – that spreads conspiracy theories and false information about the U.S. government.”

In addition, the legislation would require the process, either the SF-86, the interview portion, or both, to ask any applicants “whether they participated in the Jan. 6, 2021 assault on the U.S. Capitol, or a similar ‘Stop the Steal’ event, and the precise role they played in that event.”

.@RepStephMurphy on her bill to bar participants of Capitol riots from getting a security clearance: “I don’t think it’s a crazy idea that if you participated in a violent attempt to overthrow our government, that you shouldn’t be allowed to work for that very same government.” pic.twitter.com/ZAvAORwJEw

The bill would also require the SF-86 form to ask “applicants whether they participated in the Jan. 6, 2021, assault on the U.S. Capitol or a similar “Stop the Steal” event, and the precise role they played in that event.”

Murphy, a member of the Armed Services Committee, said about the proposed legislation, “If any Americans participated in the Capitol attack, or if they subscribe to these dangerous anti-government views of QAnon, then they have no business being entrusted with our nation’s secrets.”

Could This Be Just The Beginning?

A bill prohibiting someone with possibly conservative views, often described as “anti-government,” is just the latest in a string of events stemming from the violent protests at the Capitol on Jan. 6.

The violence had begun as a peaceful protest by supporters of former President Donald Trump over what they believed to be a fraudulent election.

Since that day, the attempted cancelation of conservative thought, or anything that does not fall in line with the Democrat Party, goes way deeper than a few tweets by Donald Trump and others.

RELATED: Google Announced It Will Stop Donating To Republicans Who Objected To 2020 Election Results

The cancelation of those who might have a difference of opinion from the Democrat Party and the mainstream media has recently gone into overdrive. In recent days, the phrase “deprogramming conservatives” has been heard a lot by the Left.

“These are people who are radicalized right now. It’s going to take a very long time to deradicalize these people and a lot of effort.”

She went on to say that, “we need to double, triple, or quadruple the funding for these programs,” meaning programs designed to tamp extremism.

Katie Kouric recently appeared on  HBO’s “Real Time with Bill Maher” and asked, “How are we really going to almost deprogram these people who have signed up for the cult of Trump?”

But Not All Trump Supporters Are Bad!

In a recent interview with Don Lemon on CNN, Kasich said that, as bad as the D.C. riot was, some Trump supporters “are redeemable,” and that, “I can tell they are. And you know that some of them are, don’t you? You’ve met them. They’ve gone up to you and said, “Lemon you’re right.”

An incredulous Lemon answered, “How do you reason with unreasonable people? No matter how many times you show them video of Trump supporters and people-hundreds-150 or so, or close to it, who have been arrested from the capitol…that is not living in reality.”

William F. Buckley, considered one of the founding fathers of modern conservatism, once put it like no one else: “Liberals claim to want to give a hearing to other views, but then are shocked and offended to discover there are other views.”

Liberals claim to want to give a hearing to other views, but then are shocked and offended to discover that there are other views. – William F. Buckley Jr. #quotes #quote #inspiration