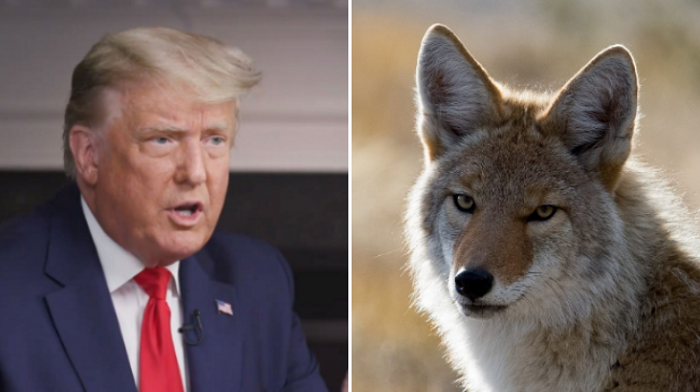 A Georgia lawmaker is being mocked relentlessly after appearing to suggest that President Trump believes actual coyotes – the animal – are smuggling children across the border.

The controversy began when debate moderator Kristen Welker asked the President a question regarding family separation at the border.

Trump noted that illegal immigrant families put themselves in perilous situations by allowing coyotes – a person paid to smuggle them across the border, often associated with drug cartels – to guide them.

He suggested bad actors are involved in using children to help them get across the border as well.

“Children are brought here by coyotes and lots of bad people, cartels, and they’re brought here and it’s easy to use them to get into our country,” he said.

Trump says “we’re trying very hard” to find the parents of more than 500 children separated at the border.

Biden: “These 500-plus kids came with parents. …Coyotes didn’t bring them over, their parents were with them. They were separated from the parents” #Debates2020 pic.twitter.com/yMzVozsPiC

RELATED: James Woods Is Fired Up After Biden Says America Is ‘An Idea’ We’ve ‘Never Lived Up To’

She Actually Thinks Trump Means Real Coyotes at the Border

It was seemingly well understood what President Trump was referring to. Seemingly.

Not so for Dar’shun Kendrick, a Democrat Georgia State Representative, or dozens of other “blue check marks” on Twitter.

Kendrick did her best to dunk on the President for making the reference to drug-smuggling coyotes.

“Did [Trump] just say 545 kids they can’t find their parents for came over through ‘cartels and coyotes?!’” she tweeted.

“How the hell does a coyote bring a whole human across the border?!” she continued. “Lord – stop talking.”

Did @realDonaldTrump just say 545 kids they can’t find their parents for came over through “cartels and coyotes”?! How the hell does a coyote bring a whole human across the border?! Lord—–stop talking. #FinalDebate

Kendrick Wasn’t the Only One

We wouldn’t fault you, the reader, if you somehow thought ‘There’s no way she said something that incredibly stupid.’

Well, strap yourselves in, because Kendrick wasn’t the only verified Twitter personality to be that clueless about illegal immigration.

This Harvard University student – you may know him from his anti-gun lunacy – believes President Trump was actually denigrating the parents of illegal children as ‘coyotes.’

The level of xenophobia is sickening.

Other journalists and people of influence on social media appear to have made the same mistake.

Did Trump just say children were brought to the border by coyotes? #Debates2020

Please explain “children are brought here by coyotes” to me? I’m certain that’s not literal…#Debates2020

What does “children are brought here by coyotes” mean?! #Debates2020

Did he just say children are brought here by coyotes?! What does that even mean?!

Tonight on blue checkmark twitter, they don’t know what coyotes are.

(This isn’t even half of all I found 🥴) pic.twitter.com/Jsh57jSBb1

As you might imagine, conservatives didn’t hold back their responses to some of the ignorant tweets.

You humiliated yourself, take the L. https://t.co/9AX7tV7KNx

“I have many strong opinions on illegal immigration but I don’t know what a ‘coyote’ is.”

Kendrick took the brunt of the mockery …

As anyone who’s ever spent any time in a border state knows, “coyotes” are people hired by cartels and human traffickers to illegally traffic immigrants over the U.S.-Mexico border into the U.S. https://t.co/nSkeHBd40r

If you’re hearing the word “coyote” for the first time tonight, you just might be watching too much CNN. https://t.co/wtmobbKS56

This person made it through law school AND got elected to state office. https://t.co/DvIyVIpEC8 pic.twitter.com/mbOIKN1PU4

Even the President’s son, Donald Trump Jr. chimed in.

“This is the chief Deputy Whip of the Georgia house democrats,” he tweeted. “She has no idea that coyotes is the name given to the human traffickers smuggling people over the borders.”

“She thinks DJT is talking about the animal, it’s hard to believe that this is an elected official. Amazing.”

This is the chief Deputy whip of the Georgia house democrats. She has no idea that coyotes is the name given to the human traffickers smuggling people over the borders.

She thinks DJT is talking about the animal, it’s hard to believe that this is an elected official. Amazing. https://t.co/hkIwb1vcWH

The Federalist responded with a column titled, “If You Don’t Know That ‘Coyotes’ Are Human Smugglers, Shut Up About The Border.”

The left’s ignorance has been exposed for everyone to see. They’ll call President Trump stupid, but don’t know what a ‘coyote’ in border terminology means.