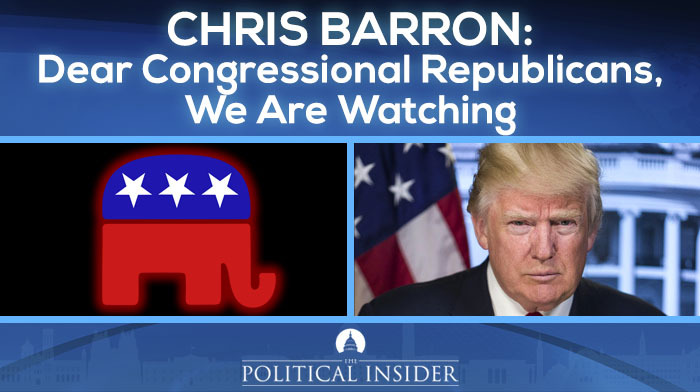 Whether Congressional Republicans know it or not, they have reached a fork in the road. Where they go from here will decide their future.

Republicans will retain the Senate and make serious inroads in the House thank to President Donald J Trump’s ability to motivate our base and grow the party (as seen by the amazing gains Trump made among Hispanics, Blacks and LGBT voters).

The fork in the road is pretty simple: Either you stand with the overwhelming majority of your party in demanding that every single legally cast ballot is counted, or you stand against them.

Once you start down one path, there is no turning back.

You won’t be missed. https://t.co/IZ7YfHcZ7f

RELATED: Trump Is A President Who Refuses to Lose

We have always known that – win or lose – the battle for the heart and soul of the party would begin the moment the 2020 election was over. The reality is that the battle has come a little earlier.

The election is not over, we do not know who the President will be, but yet the moment of choosing is before Congressional Republicans.

Republican primary voters chose Donald Trump in 2016 – out of a large and experienced pack of Presidential hopefuls – because they were tired of Republicans who would run promising to fight for what they cared about, only to buckle under at the first moment things got tough.

Republicans nominated Trump and he was elected because we wanted a fighter.

Republicans wiped out Democrats all across the Ballots this week but @realDonaldTrump didn’t get enough votes? pic.twitter.com/p408AjHT8T

Trump never gave up. He always fought and he continues to fight.

Now it is time for Republicans in Congress to stand up for him, for party and – most importantly – for the integrity of our elections.

Many of these Republicans wouldn’t be in office if President Trump’s name weren’t on the ballot.

President Trump single-handedly saved the Republican Senate and defied the odds by closing the gap in the House (giving Republicans a serious chance of retaking the lower chamber and vanquishing Nancy Pelosi in 2022).

RELATED: BET Founder Bob Johnson Says That Trump Being Re-elected Would Be Great For Black Americans

They must stand up and be heard and they must do it today.

The energy and enthusiasm among Republicans is firmly behind President Trump.

The Stop the Steal Facebook group launched by Women for America First amassed 365,000 members in less than 24 hours before the tech giant stepped in and shut the group down.

🚨🚨BREAKING🚨🚨 Facebook has shut down the Stop the Steal Facebook group that had 365,000 members. Is this how social media treated Black Lives Matter protestors? @AmyKremer @KylieJaneKremer @WomenforTrump

What’s missing? Far too few Congressional Republicans have stepped up to the plate and spoken out against the Democratic shenanigans at the ballot box.

If Republicans will not stand up for us, then we will come after them.

RELATED: Minority Voters Turn Out For Trump In Record Numbers

Every single Republican member of the House and Senate who refuses to stand up for the integrity of our elections should get a primary challenger in their next election.

The Tea Party movement after Obama’s election in 2008, was born out of disgust with the Republican establishment.

The bloodbath that occurred in GOP primaries in 2010 and 2012 will look like child’s play compared to what we will see if the establishment chooses to roll over in this most critical moment.

We are watching the birth of the next Tea Party with the #StoptheSteal movement. This is where the energy and enthusiasm is in the GOP. @AmyKremer @KylieJaneKremer @WomenforTrump pic.twitter.com/QOwKKUOb0i

Congressional Republicans, now is your time of choosing.

Choose wisely and remember – we are watching!