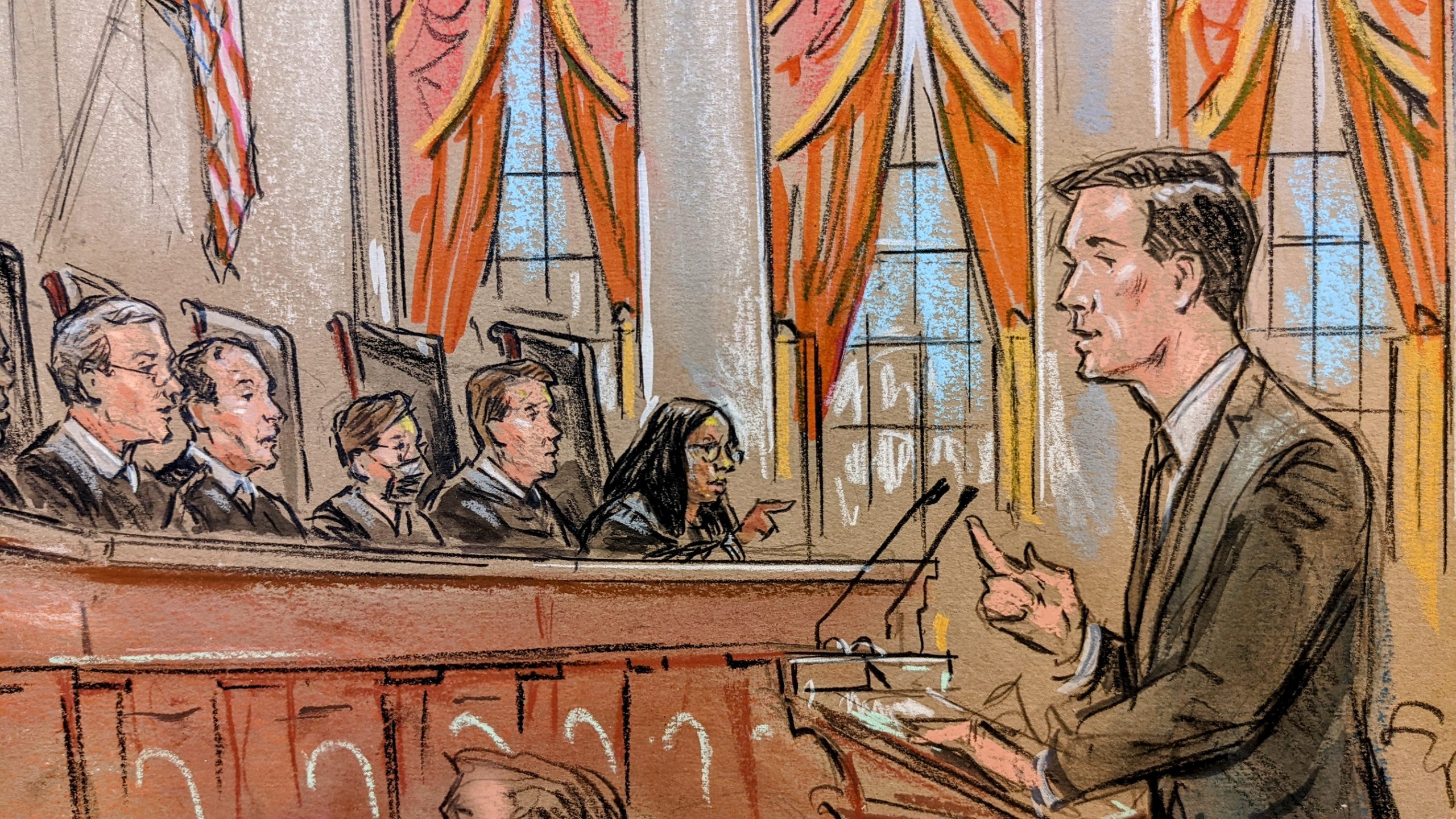 In February, a divided Supreme Court temporarily blocked a ruling by a three-judge district court in Alabama, which had agreed that the state’s new congressional map likely violates the Voting Rights Act. After nearly two hours of oral argument on Tuesday, the justices appeared inclined to permanently set aside the district court’s ruling, even if it wasn’t clear on exactly what theory they would do so. But even a narrower ruling than the broad pronouncement the state seeks would, the plaintiffs contend, make it much more difficult to challenge redistricting plans on the ground that they weaken the collective voting power of Black people.

The law at the center of the case is Section 2 of the Voting Rights Act, which bars election practices that result in a denial or abridgement of the right to vote based on race. Voters and other groups have challenged Alabama’s 2021 redistricting map for its seven seats in the U.S. House of Representatives, arguing that the map violated Section 2 by diluting the votes of the state’s Black residents, who make up 27% of the state’s population. The state, the challengers said, illegally packed many Black voters into one district in a part of Alabama known as the “Black Belt.” At the same time, the challengers contended, the state dispersed Black voters in the rest of the Black Belt into several other districts where they are only a minority, when it should have created an additional majority-Black district.

A three-judge court that included two judges appointed by President Donald Trump ruled that the map likely violates Section 2. But in February the Supreme Court – by a vote of 5-4 – put that decision on hold, allowing Alabama to use the map in the 2022 elections, and set the case for argument in the 2022-23 term.

Alabama’s solicitor general, Edmund LaCour, argued for the state. He began by urging the justices to adopt an interpretation of Section 2 that would effectively allow the state to take a race-blind approach to redistricting. Section 2, Lacour stressed, does not require Alabama to abandon the race-neutral criteria that it traditionally uses when drawing new maps, such as the desire to adhere closely to previous district lines. If a redistricting plan is drawn using those race-neutral criteria, Lacour suggested, then it is “equally open” to all voters and does not violate Section 2.

Justice Elena Kagan told LaCour that his position would be a significant change from the court’s current approach to Section 2. Under the court’s current law, she stressed, the case is “kind of a slam dunk” in favor of the challengers. The three judges who heard the case in the lower court regarded it as an “easy” one, she observed, particularly given the state’s history of discrimination and the extent to which voting in Alabama is “incredibly racially polarized.”

Kagan pressed LaCour on whether, under the state’s interpretation of Section 2, Alabama could create a plan without any majority-minority districts. “Some of your arguments,” she told Lacour, “sweep extremely broadly.” Kagan later called the VRA “one of the great achievements of American democracy,” but she lamented that the court’s recent decisions have pared back the protections that the law provides while highlighting that Section 2 remains a remedy to combat discrimination in redistricting. But you are asking us, she told LaCour, to “make it extremely difficult to prevail” in vote-dilution claims.

Justice Ketanji Brown Jackson pushed back against LaCour’s contention that Section 2 is “at war with itself and the Constitution” because requiring the state to create a majority-Black district would involve sorting voters based on race, which the 14th and 15th Amendments prohibit. Deploying an approach often used by her conservative colleagues, Jackson pointed to what she described as the “race-conscious” goal of the drafters of the 14th Amendment. The drafters, she observed, were “trying to ensure that people who had been discriminated against … were actually brought equal to everyone else in society.” “That’s not a race-neutral or race-blind idea,” Jackson concluded.

Justice Samuel Alito shifted the discussion away from this argument, which he characterized as “quite far-reaching,” to an argument that he described as the state’s “basic” and “least far-reaching” – but which would nonetheless be a difficult test for challengers to meet. Under the Supreme Court’s 1986 decision in Thornburg v. Gingles, the seminal decision governing claims that redistricting plans illegally dilute minority votes, a challenger must show (among other things) that a minority group is sufficiently large and compact to form a majority. Alabama has argued, Alito noted, that a challenger cannot meet this requirement, even if it offers a map with a majority-minority district, if an “unbiased mapmaker” would not create such a map. That argument, Alito stressed, “is not at war” with the court’s existing case law.

Alito returned to this line of questioning with Deuel Ross, who represented some of the voters challenging the state’s map. If the court in Gingles indicated that the minority group must be “sufficiently large and compact to constitute a majority in a reasonably configured district,” Alito asked, wouldn’t the inquiry into whether a district is “reasonably configured” include a determination of whether it is “the kind of district that an unbiased mapmaker would draw?” 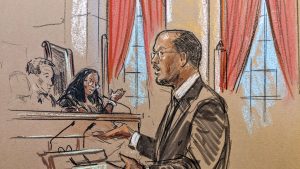 Ross initially rejected the idea that a mapmaker’s biases should play any role in a Section 2 analysis, reiterating that Section 2 “is about results and doesn’t speak to intent.” Moreover, he added, “any standard that requires some sort of race blindness, as Alabama is saying, would not only make it difficult for plaintiffs to satisfy” this requirement under Gingles, but would also make it much harder for states to draw all of their congressional maps. But in any event, he continued, the lower court in this case concluded that all of the challengers’ proposed maps adhered to traditional redistricting criteria just as much as, if not more than, the state’s map.

Arguing on behalf of other voters challenging the state, lawyer Abha Khanna portrayed the Gingles requirement as a “demographic question about where the minority population is,” rather than a question of whether a majority-minority district can be drawn without considering race as a factor. Adopting the state’s rule, she said, “would certainly be the first time this court has instructed that plaintiffs actually have to tie one hand behind their demographer’s back and blind him to the actual demography of the state.” 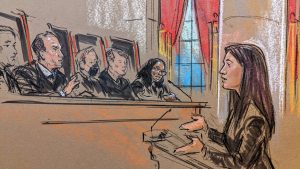 Justice Amy Coney Barrett echoed Alito’s questions. Under Alabama’s interpretation of Section 2, she said, a challenger can meet the Gingles requirement “by coming in with one map that was drawn without taking race into account.” If computer simulators can create an infinite number of maps that take many different factors other than race into account, Barrett said, “why would that be an unreasonable burden for a plaintiff to shoulder?”

Justice Brett Kavanaugh focused on a slightly different question, which in his view was “the key under our precedents to interpreting Section 2” and the Constitution correctly: whether the additional majority-Black district in the challengers’ map is “reasonably compact.” The state, Kavanaugh noted, has argued that the “district is too sprawling to be reasonably compact or reasonably configured.” And more broadly, Kavanaugh observed, the question of whether a district is compact is one with which “the states and the plaintiffs and the district courts are all struggling” under the current law.

Ross countered that the additional majority-minority district closely mirrored the state’s own map for seats on its board of education. That map, Ross stressed, which was drawn “at the same time using the same redistricting criteria,” “created virtually the same district that also spreads across the state.”

U.S. Solicitor General Elizabeth Prelogar, arguing in support of the challengers, explained that “there are several different metrics …  to measure compactness in redistricting litigation.” But in this case, Prelogar told Kavanaugh, the lower court “went through all of them” before concluding that the challengers’ map “performed as well or better than the” state’s plan. Moreover, Prelogar continued, even if Kavanaugh believes that “this is a tough question and maybe a different fact finder could have reached a different result,” the Supreme Court should defer to the lower court’s findings. 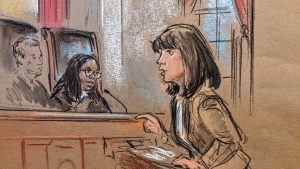 Solicitor General Elizabeth Prelogar argues on behalf of the federal government in support of the challengers. (William Hennessy)

In his rebuttal, LaCour told the justices that Alabama was not asking for “dramatic” changes in the law. Instead, he suggested, “[w]e just need some clarification” about what redistricting law requires. By that point, nearly two hours after the argument began, it seemed very possible that the state would prevail, even if it doesn’t ultimately receive the sweeping victory it seeks.