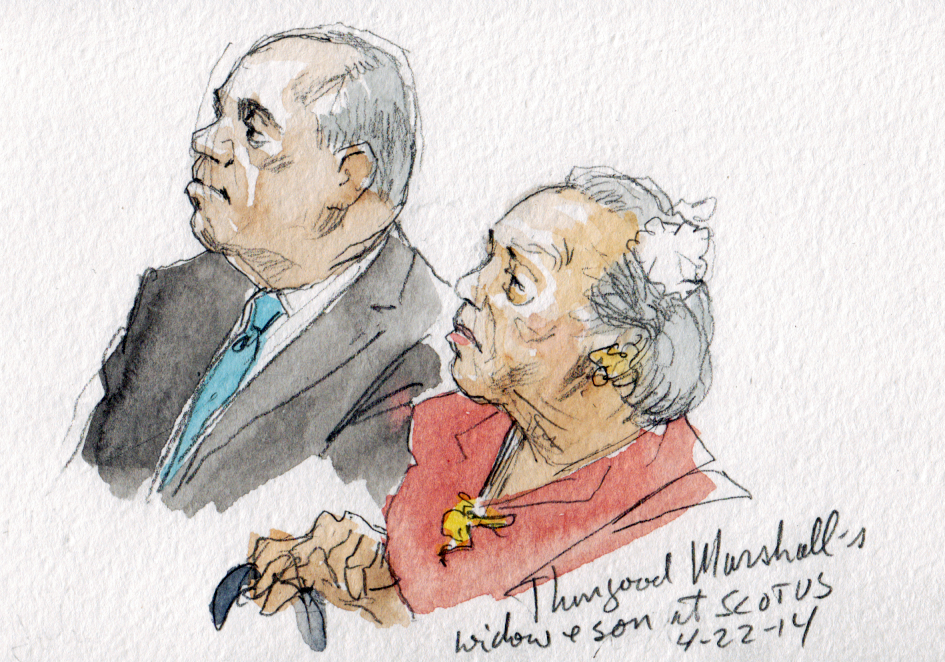 Cissy Marshall, joined by one of her sons, attends the opinion announcement in Schuette v. Coalition to Defend Affirmative Action in 2014. (Art Lien)

Cecilia “Cissy” Suyat Marshall, the widow of the late Justice Thurgood Marshall, who was the first Black justice to serve on the Supreme Court, died on Tuesday in Falls Church, Virginia, the court announced. She was 94.

Cissy Marshall was born in Hawaii. After World War II, she moved to New York City, where she took classes in stenography. In 1948, she went to work for the National Association for the Advancement of Colored People. At the NAACP, she met her future husband, a civil rights lawyer, who won 29 of the 32 civil rights cases he argued before the Supreme Court. Cissy Marshall assisted Thurgood Marshall, whom she married in 1955, on Brown v. Board of Education, the landmark decision prohibiting racial segregation in public schools.

In a statement released on Tuesday, Chief Justice John Roberts remembered Cissy Marshall as a “vibrant, engaged member” of the court community who often attended oral arguments and other events at the court. In his “view from the courtroom” for the 2018 oral argument in Trump v. Hawaii, SCOTUSblog contributor Mark Walsh noted that Cissy Marshall was seated next to Don McGahn, President Donald Trump’s White House counsel — but neither of them seem to recognize the other.

Justice Elena Kagan, who clerked for Thurgood Marshall, also remembered Cissy Marshall on Tuesday, describing her as a “marvelous woman.” “The community of TM clerks will today feel a great loss.”