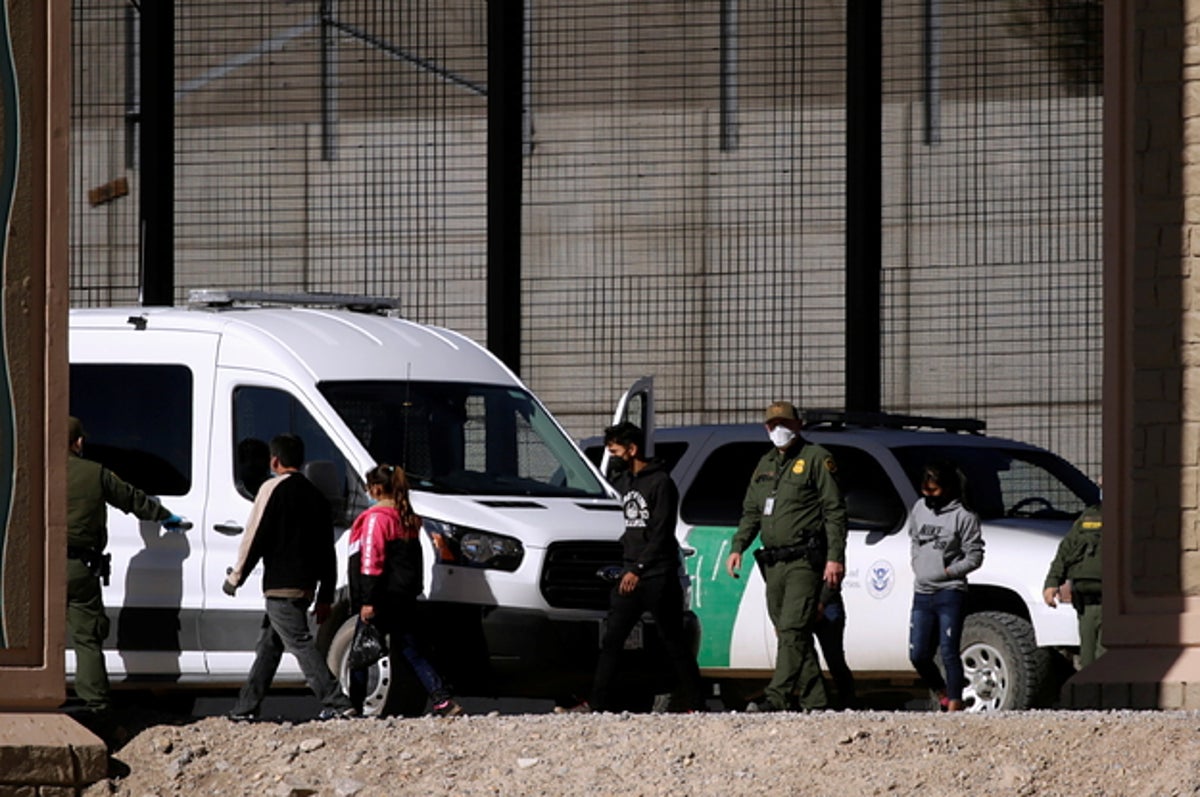 Border Patrol agents in parts of Texas have started to release some undocumented immigrant families after Mexican authorities refused to take them back under a Trump-era policy that has expelled thousands of people who have illegally crossed into the US.

It marks a significant shift from recent years, when former president Donald Trump ordered all immigrants and asylum-seekers who were caught trying to enter the US illegally to be sent back to Mexico. Since March 2020, US Customs and Border Protection has immediately expelled 382,552 immigrants back into Mexico. Citing a section of the public health code known as Title 42, the Trump administration said it was necessary to deport immigrants in order to halt the spread of the coronavirus. But an unintended consequence of the policy was that immigrants have repeatedly tried to cross undetected, driving up numbers of arrests at the border.

CBP said the families were recently released due to COVID-19 restrictions that have caused some of its facilities to reach capacity. Mexico also recently passed a law prohibiting authorities from keeping undocumented immigrant children in detention centers. With no space to hold the families in US detention centers and Mexico refusing to take them, CBP started last week to release them in Texas border cities like McAllen and Brownsville.

“COVID-19 protocols, changes in Mexican law, and limited US holding capacities have forced us to adapt,” CBP said. “For those migrants who are released, CBP may work with non-government organizations who will assist them through the out-of-custody process.”

The National Institute of Migration (INM), Mexico’s immigration enforcement agency, declined requests from BuzzFeed News for comment. However, the country’s foreign ministry told Reuters there had been “local” policy adjustments, citing a child protection law passed late last year. A senior Mexican official told the news agency that the changes were “minor” and appeared to be limited to the state of Tamaulipas, which sits across the border from Brownsville, Texas.

The release of the families has been used by immigration hawks and former Trump administration officials to warn of a looming crisis at the border fueled by President Joe Biden’s recent executive orders. Chad Wolf, the former acting secretary of the Department of Homeland Security, tweeted that the change marked the return of “catch and release” and warned that it will lead to a “full blown crisis” at the border.

The phrase “catch and release” has been decried by immigrant advocates who say it’s a dehumanizing way to describe the practice of allowing asylum-seekers to wait outside of detention while their cases are adjudicated.

In Del Rio, Texas, which is also across from Tamaulipas, a shelter operated by the Val Verde Border Humanitarian Coalition said it has seen an increase in immigrants seeking help. In a Facebook post on Jan. 30, the organization said that on average, it used to help 25 people a week. Now, the coalition said, it’s helping at least 50 immigrants a day.

A DHS official told BuzzFeed News that the release of a certain number of families was only occurring in one area of the border. Local media reported that up to 50 immigrant families a day were released in Brownsville; a shelter in McAllen told Reuters it has seen 50 to 80 people a day since Jan. 27.

“In January, we welcomed 110 asylum-seekers, the largest number we have seen in the past 10 months,” she added.

It’s unclear why some families were allowed into the US and others continue to be expelled into Tijuana. An INM official in Baja California said they continue to receive Title 42 immigrants and that no order or agreement saying Mexico will no longer accept families exists.

Taylor Levy, an immigration attorney based in El Paso, said the number of asylum-seeking families released in mid- and South Texas started increasing on Jan. 27. Some of those families were from countries that CBP can’t officially expel back to Mexico, like Haitians, Cubans, and Venezuelans, Levy said. But others were Central Americans.

“This is approximately 50 people per day being released, which are fairly moderate numbers,” Levy said.

Still, Levy warned, some immigrants continue to be expelled instead of being released into the US, either via land to Mexico or air to their home countries.

Historically, a source with knowledge of the situation said, INM would detain immigrant children and families, transfer them to Mexico’s version of child protective services, and make a determination on their right to stay. Now, because of the new law, expelled immigrant families can only be sent to the agency’s shelters as long as they have capacity.

“While some people who were expelled under Title 42 were directly handed over to INM,” Levy said, “a large number of people were taken to the middle of the bridge by CBP and were told to walk south. That’s it. There was zero interaction from any state or federal Mexican authorities.”

In some cases, families expelled from the US were taken to shelters in Ciudad Juárez and Tijuana, Levy said, but that is not considered detention and would not be affected by Mexico’s new law.

Joanna Williams, director of education and advocacy at the Kino Border Initiative, a nonprofit based in Nogales, Arizona, said that other than four or five exceptions last year, INM has never given families or individuals any type of document after being expelled. The agency might give them directions to a shelter, but the immigrants have to make their own way there.

“Essentially they are just left on the street,” Williams said.

Expulsions of immigrant families have continued in the Nogales area, she added.

Previously in Matamoros, Mexico, across the border from Brownsville, Mexican immigration officials would issue documents to expelled families giving them permission to stay, said Sister Norma Pimentel, executive director of Catholic Charities of the Rio Grande Valley. From there, families were “more or less” left to figure out where to go, she added.

The South Texas border has been one of the busiest areas for immigrants trying to cross into the US, but Trump administration policies had effectively sealed off the border in recent years.

Before the pandemic was declared, the US had used another policy known as the Migrant Protection Protocols to stop releasing families into the country. Under MPP, unofficially known as the “Remain in Mexico” policy, immigrants and asylum-seekers would be forced to wait in Mexico for their cases to be adjudicated by a US immigration judge. Thousands of immigrants are still waiting, some in dangerous border cities, even though the Biden administration announced in January that it would stop enrolling new immigrants into the program.