Coronavirus will have killed half a million people in the US by the end of next month, Joe Biden forecast on Thursday as he warned that his administration would not be able to dramatically accelerate the pace of vaccinations.

The president, who campaigned on a pledge to overhaul the US response to the pandemic, told reporters: “The death toll will probably top 500,000 next month, the cases will continue to mount.”

“We didn’t get into this mess overnight. It’s going to take months for us to turn things around,” Mr Biden said during a briefing at the White House on his first full day as president.

Mr Biden also lowered expectations for a step change in the speed of the US vaccination campaign, warning that “the brutal truth is it’s going to take months before we can get the majority of Americans vaccinated”.

He reaffirmed his commitment to launch “an aggressive, safe and effective vaccination campaign”, with 100m inoculations to be administered during his first 100 days in office.

That would not represent a significant increase to the current pace of vaccinations: according to the US Centers for Disease Control and Prevention, an average of 912,497 doses were administered per day over the past week.

Video: Coronavirus: the race between vaccines and new variants

Asked by a reporter whether the target was ambitious enough, Mr Biden responded: “When I announced it, you all said it’s not possible. Come on, give me a break, man.”

Mr Biden took office as the rate of fatalities remained elevated. On Thursday, the US reported 3,889 deaths from the virus, following a record single-day increase of 4,409 deaths on Wednesday, according to the Covid Tracking Project. That put the total number of US fatalities at 400,726.

The president’s bleak assessment of the pandemic situation marks a sharp departure from his predecessor Donald Trump, who repeatedly predicted that the US was on the cusp of defeating the virus only for it to spiral further out of control.

“The honest truth is, we’re still in a dark winter of this pandemic,” Mr Biden said. “It’s going to get worse before it gets better. It’s going to take many months to get where we need to be.”

Speaking later in the day, Anthony Fauci, one of the few presidential coronavirus advisers who has remained in place during the transition, said Mr Biden’s vaccine plan involved “taking what’s going on, but amplifying it in a big way”. 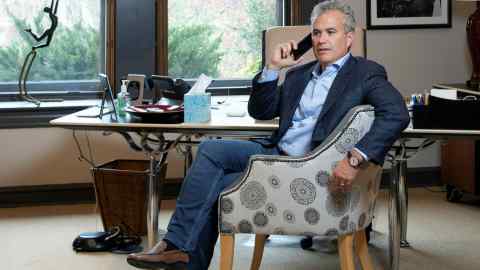 Dr Fauci also said the US has plans to modify vaccines if new strains of Covid-19 are shown to be resistant to them. “There are alternative plans, if we ever have to modify the vaccine,” he said. “That is not something that is a very onerous thing. We can do that, given the platforms we have.”

He admitted he felt a sense of relief to be operating under a new president, having been sidelined and publicly criticised by Mr Trump during the previous administration. “Let the science speak: it is somewhat of a liberating feeling,” said Dr Fauci.

Meanwhile, the president said his administration would force anyone flying into the US to have had a negative test result beforehand and to quarantine upon arrival, a slight toughening-up of the existing regime.

He added he would make it mandatory to wear a mask on some forms of interstate travel.

Mr Biden also pledged to invoke the Korean war-era Defense Production Act to force companies to make items that are in short supply, including vaccine syringes, N95 masks and materials for testing kits.