Joe Biden, the US president-elect, has warned that the US’s ability to counter the latest record surge of coronavirus cases and distribute a vaccine could be hampered if Donald Trump does not allow a smooth transition of power.

“More people may die if we don’t co-ordinate,” Mr Biden said in a briefing with reporters on the economic fallout from the pandemic.

“To have to wait until January 20 to start that planning puts us behind a month and a half. It’s important that there be co-ordination now — now or as rapidly as we can get done,” he added.

Mr Biden’s remarks were among his most forceful attempts to put pressure on Mr Trump to concede defeat and launch the transition between the two administrations, which would allow the president-elect to start receiving classified intelligence briefings and government agencies to collaborate with the incoming administration.

“I am hopeful that the president will be mildly more enlightened before we get to January 20,” Mr Biden said. “I find this more embarrassing for the country than debilitating for my ability to get started.”

The refusal of Democrats and Republicans to co-operate with one another is not due to some mysterious force beyond our control. It’s a conscious decision

Mr Biden’s comments came as a growing number of cities and states have tightened restrictions on economic activity, including banning indoor dining at restaurants, because of a widespread spike in cases.

Mr Biden, whose campaign focused heavily on Mr Trump’s handling of the pandemic, praised governors from both parties for taking stricter health measures. He also attacked Scott Atlas, one of the president’s advisers, for urging Americans to “rise up” in response to new restrictions in Michigan.

The president-elect delivered remarks on the economy on Monday from his home base of Wilmington, Delaware following a briefing with four business leaders, including Mary Barra, the chief executive of General Motors, and Satya Nadella, the CEO of Microsoft. He also met with five union chiefs including Richard Trumka of the AFL-CIO and Mary Kay Henry of the SEIU.

Mr Biden asked for collaboration between corporate America and organised labour to back his economic agenda, which includes large-scale spending partly funded by higher taxes, to tackle the economic crisis triggered by the pandemic.

With many states grappling with new shutdowns related to soaring infection rates, which is likely to sharply slow down the recovery in the coming weeks, Mr Biden called for the White House and Congress to reach a deal on new economic stimulus before he takes office, and blamed Mr Trump for failing to push for a compromise.

“The idea the president is still playing golf and not doing anything about it, this is beyond my comprehension. You’d think he’d want to go off on a positive note. What is he doing?” Mr Biden told reporters.

Mr Biden did not, however, call for Democrats to lower their current preferred $2tn pricetag for new stimulus to levels under $1tn, which might be more acceptable to Republicans. 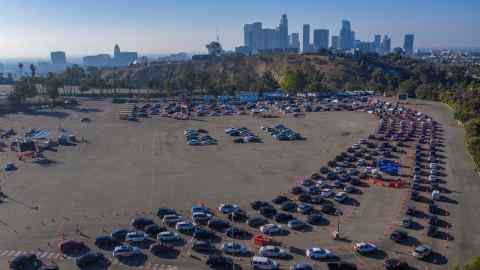 Once he takes office, Mr Biden’s own sweeping economic agenda is at risk of being scuppered and limited from the start by the results of the congressional elections, which delivered a smaller Democratic majority in the US House of Representatives and a Senate that may still be controlled by Republicans.

If Democratic candidates win both run-off races for Senate seats in Georgia in January, the upper chamber will be evenly split, with Democrats in control and Kamala Harris, the US vice-president, casting any tiebreaking votes. Mr Biden, who served in the Senate for decades, appealed for greater comity on Capitol Hill to avoid the likely gridlock in 2021, saying it was “part of the mandate” from US voters.

“The refusal of Democrats and Republicans to co-operate with one another is not due to some mysterious force beyond our control. It’s a conscious decision. It’s a choice that we make,” Mr Biden said.

He also asked business and unions to do the same.

“On the call I made it clear to the corporate leaders, I said ‘I’m a union guy — unions are going to have increased power’. They nodded, they understand,” Mr Biden said. “It’s not anti-business, it’s about economic growth, creating good paying jobs.”