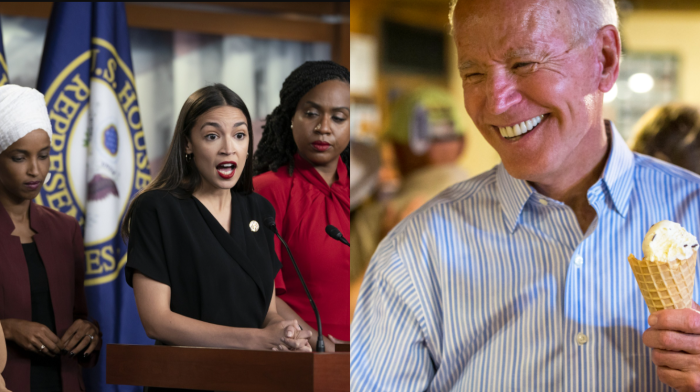 Progressives must be furious at the appointment of Bruce Reed, a moderate “deficit hawk,” to be Biden’s deputy chief of staff.

Reed, a longtime ally of Vice President Biden, was announced as his presidential deputy chief of staff on Tuesday by his transition team.

Reed takes his place as yet another moderate (or “neoliberal, if you follow the far-left on Twitter) on Biden’s team, in a blow to progressives.

Reed had worked with Biden since the 1990s, and included working on the 1994 crime bill, a piece of legislation that many on those on the left have slammed as “racist.”

He has also been attacked for being a “deficit hawk,” in a petition widely shared and supported by progressive groups, including the Justice Democrats, which is backed by Representatives AOC, Ilhan Omar, and the rest of “The Squad.”

(What in the world is a Democrat “deficit hawk?”)

“Putting someone in the administration who will prioritize paying down the deficit ahead of all other concerns in charge is a recipe for cutting our earned benefits and turning the COVID recession into a depression,” the petition reads.

“Rejecting Reed will be a major test for the soul of the Biden presidency.”

While no progressive Democrats in the party have reacted to the news, leftists on Twitter have been fuming over the appointment.

Whenever I see Bruce Reed’s name, I think about that part of @MMFlint’s Bowling for Columbine where he showed how 90s welfare reform enabled the tragic first grade school shooting of Kayla Rowland. Monstrous that Reed is going to have a very senior role in the Biden admin. https://t.co/8ucTwMCsg8

Squad Members Sorely Disappointed With How New Administration Turning Out

The appointment of Reed by Biden is only the latest in a long string of losses for progressive Democrats.

According to Politico, progressive Democrats are now looking for a “reset” after a massively disappointing 2020.

“Progressives are like a superstar young athlete that is supposed to be coming into his prime but has still not established himself as a starter, let alone an all-star,” said Max Berger, the former director of progressive outreach for Elizabeth Warren’s presidential campaign.

Ilhan Omar and AOC have had great concern over those surrounding Biden at the moment as he looks to build up his presidential administration.

Omar told CNN’s Ana Carbrera earlier in the month that she shared the worries of Senator Bernie Sanders that progressives would not have a “big enough seat at the table” in the Biden cabinet, but she remained hopeful of their influence.

AOC was far more critical of Biden’s transition team, not mincing words when she described the team, which consists of corporate executives, Big Tech executives, and Wall Street bankers as simply “horrible.”

The American people have an “extreme disdain for this moneyed, political establishment that just rules Washington, D.C. no matter who you seem to elect.”