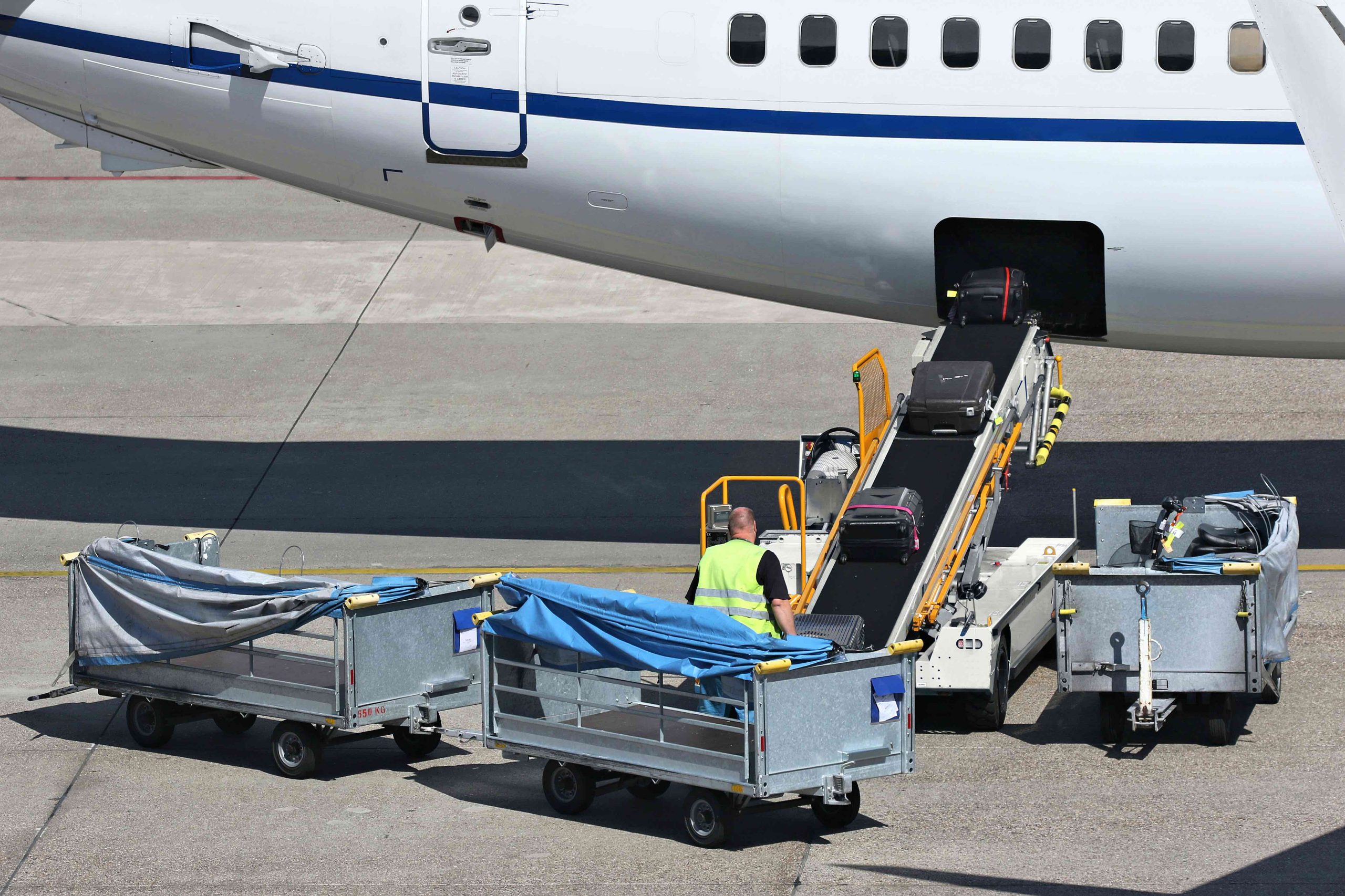 An airline worker loads baggage onto a plane. (Bjoern Wylezich via Shutterstock)

Like many cases involving the Federal Arbitration Act, Southwest Airlines Co. v. Saxon began with an employment dispute: Southwest employee Latrice Saxon believed she was owed overtime pay. On behalf of herself and her fellow ramp-agent supervisors, Saxon filed a complaint under federal wage-and-hour law in federal court. Southwest responded that Saxon’s case should be dismissed because she was bound by an arbitration agreement, which was enforceable under the FAA. Similar arguments routinely succeed in employment cases – but Saxon argued that her case was different because the FAA does not apply to interstate transportation workers.

The U.S. Court of Appeals for the 7th Circuit agreed that Saxon’s job fell within the exception, and on Monday, the Supreme Court will hear oral argument in the case. If the justices affirm the 7th Circuit, Saxon will be able to pursue her overtime claim in court. And the eventual decision may have consequences far beyond airline employees like Saxon. Companies like Amazon and Uber are closely watching the case for how it will affect other portions of the American workforce engaged in moving goods and people.

The Federal Arbitration Act generally requires courts to enforce arbitration agreements, but Section 1 of the statute exempts “contracts of employment of seamen, railroad employees, or any other class of workers engaged in foreign or interstate commerce.” Saxon is neither a seaman nor a railroad employee – she works at Chicago Midway Airport, where she supervises ramp agents as they load and unload luggage and other cargo onto planes, and also loads and unloads cargo herself. Therefore, the question in this case is whether Saxon’s job puts her in a “class of workers” who are “engaged in … interstate commerce.”

Southwest argues that only workers who “participate directly in the cross-border transportation of goods or people” qualify for the transportation-worker exemption. That definition, the company reasons, excludes ramp supervisors like Saxon, who do not accompany cargo on its interstate journey. In contrast, Saxon argues that the transportation-worker exemption reaches all airline employees, or, alternatively, that it at least reaches workers who start goods on their interstate journey by loading them onto vehicles, or who unload them at their destinations.

“[A]ny other class of workers engaged in foreign or interstate commerce” – language sometimes referred to as the residual category – sounds quite broad. But in its 2001 decision in Circuit City Stores, Inc. v. Adams, the court concluded that the category covers only interstate transportation workers. Circuit City rested in part on a canon of statutory interpretation known as ejusdem generis, which means that when a statute contains a list of similar terms and then a catch-all or residual term, the latter should be construed to include only items that are similar to the former. Applying that rule, the court concluded that the residual category encompassed only classes of workers who were similar to seamen and railroad employees in that that they worked in interstate commerce.

In addition to Circuit City, the court has interpreted the transportation-worker exception in one other case, New Prime Inc. v. Oliveira. In New Prime, the court unanimously decided that independent contractors who worked in interstate commerce were covered by the exception. Key to the decision was the court’s view that the phrase “contracts of employment” would have been understood relatively broadly when Congress enacted the FAA in 1925 – to reach all contracts for the performance of work, whether or not the contracting parties had an employer-employee relationship.

In line with Circuit City and New Prime, both parties make arguments based on the ordinary meaning of “engaged in interstate commerce” as it would have been understood in 1925, and on ejusdem generis. Southwest begins with dictionaries and case law from the relevant time period to argue that the clause meant “employment in transporting goods or people from state to state”; it also argues that people wouldn’t commonly use the term “transportation” to refer to the act of loading cargo. Saxon points to the FAA itself: Section 1 refers to “agreements relating to wharfage … or any other matters in foreign commerce.” “Wharfage” is the cargo loading or unloading fee paid to a dock owner, and Saxon argues this means that the FAA’s drafters understood cargo loading to be “in foreign commerce.” It then stands to reason, she continues, that someone engaged in cargo loading was engaged in foreign or interstate commerce. In addition, Saxon relies on other period-appropriate sources to argue that “interstate commerce” encompassed a package’s entire journey, from drop-off for shipping through delivery at its final destination, including loading onto a ship or railcar.

Both parties devote significant attention to the meaning of the first two categories listed in the transportation-worker exemption: railroad employees and seamen. Southwest argues that the two groups have in common frequent border-crossing, and therefore the same should be true of workers covered under the “any other class of workers” language. In particular, Southwest argues that in 1925, “seamen” referred only to people who worked on board ships, and did not encompass stevedores who worked loading and unloading ships. On the other hand, Southwest concedes that “railroad employees” could in theory mean everyone employed by a railroad, but it urges that a relatively narrow reading of that term makes more sense in statutory context.

Saxon disagrees about who counted as seamen or railroad employees in 1925, arguing that turn-of-the-century sources interpreted those terms to reach anyone who facilitated shipping or railway transportation – including cargo loaders. Therefore, she puts differently the key commonality between seamen and railroad employees: They are “necessary to the free flow of goods” by sea and rail, just as airline employees are necessary to the free flow of goods by air. She also points to a reason for the transportation-worker exception – that Congress did not want to disrupt other labor-dispute resolution systems that covered transportation workers, especially railroad workers – and notes that the Railway Labor Act broadly covers employees of railways and airlines.

Finally, Southwest makes a policy argument that will sound familiar to many readers: The FAA was enacted to overcome judicial hostility to arbitration, including in the context of employment disputes. But Saxon responds that, consistent with New Prime, the court should not artificially narrow the transportation-worker exception, relying in part on legislative history that suggests the exception was added to reassure the seamen’s union that the FAA would not cover stevedores.

The stakes in this case are evident from the amicus briefs. Southwest’s supporters include Uber, Lyft, and Amazon – all companies whose workforces involve transportation of goods or passengers. The ride-hail companies generally urge the court to decide the case in a way that would rule their drivers out from the transportation-worker exemption, notwithstanding the fact that drivers sometimes cross state lines, or transport passengers and luggage at the beginning or end of interstate trips. Amazon’s concern is local delivery drivers who carry goods on the last legs of their interstate journeys, and whom two courts of appeals have concluded fall within the transportation-worker exception.

The last time the Supreme Court interpreted the transportation-worker exception, in New Prime in 2019, it delivered a unanimous decision in favor of workers who were opposing arbitration – a surprising result when one considers the court’s recent string of pro-arbitration decisions. Whether this case will deliver a similar outcome will likely turn on how the justices read the hundred-year-old record as to whether land-based workers like stevedores were engaged in interstate commerce.