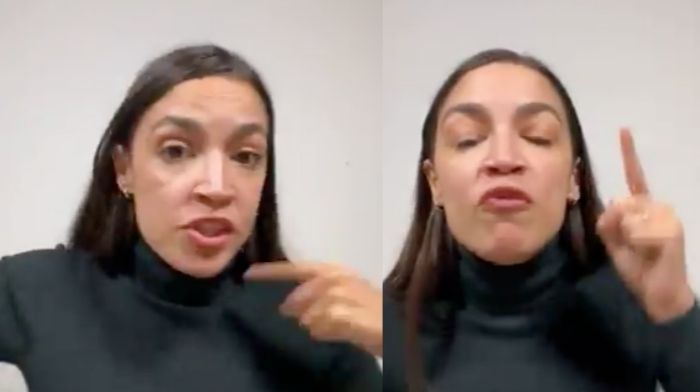 In an Instagram live video, far-left Rep. Alexandria Ocasio-Cortez (AOC) made wild claims on the eve of a second impeachment vote against President Donald Trump.

The leader of the “Squad” of far-left Democrats touched on the recent riots at the Capitol, voter suppression, and “white supremacy.”

Trump Cabinet Members ‘Have Blood On Their Hands’

Rep. Ocasio-Cortez attacked several of President Trump’s Cabinet members as being complicit in the violence at the Capitol on January 6th.

She accused former Transportation Secretary Elaine Chao, the wife of Senate majority Leader Mitch McConnell, of engaging in a conflict of interest for holding that position, without explaining why.

AOC suggests there’s a “conflict of interest” in Sen. McConnell being married to the former secretary of Transportation, Elaine Chao. pic.twitter.com/9XDrKXK5Fo

She also stated that former Education Secretary Betsy DeVos and Chao had resigned rather than “fulfilling their duties in acting the 25th Amendment and removing the president of the United States.”

Not only had both Chao and DeVos denounced the violence at the Capitol, it was the reason for their resignations.

It has been the honor of a lifetime to serve the U.S. Department of Transportation. pic.twitter.com/rFxPsBoh6t

She stated that Cabinet members “think that resigning will clean the blood off their hands,” referring to the five people that died in relation to Wednesday’s violence:

“Those five people’s blood is on your hands. What are you going to do? And they think that resigning is going to clean that blood off their hands. It is always on them. They are forever stained with the deaths of five people, especially when they did not invoke the 25th Amendment to remove this president when they had the power to do so.”

She blamed the Trump administration for children of those coming across the border illegally being ‘held in cages.’ This was a practice started in 2014 by the Obama administration.

She also accused Republicans of not caring about the Capitol Police officers who were killed during the riot, and using “blue lives matter” as merely a slogan.

In her rant, she claimed that Republicans don’t really care about the law or police, but rather “white supremacy.”

“They give a damn about white supremacy. They care about preserving the social order and the mythology of whiteness than the grandeur of our democracy.”

Ocasio-Cortez is a vocal advocate of the “defund the police” movement.

Interestingly, AOC made several eye-brow raising comments calling into the question the integrity of the election.

Speaking of Republicans, she said:

“That’s what they care about. They lust for power more than care about democracy. That’s what those people did when they voted to overturn the results of our free and fair elections and you can barely call them that with the amount of voter suppression that they have engaged in across the country. It is generous to say the least, to call them that.”

Congresswoman Ocasio-Cortez continued on that theme by declaring that Georgia and other southern states “are not red states, but suppressed states” that “must be liberated to heal.”

Her claims of unsubstantiated voter suppression come after historic turnout in the 2020 presidential election.

AOC: “The only way our country is going to heal is through the actual liberation of southern states … liberation of working people from an economic, social, and racial oppression” pic.twitter.com/d2zO6XTL9h

AOC hasn’t limited her criticisms to Republicans, though. She has also leveled complaints against Joe Biden’s cabinet picks since Election Day.

Ocasio-Cortez and other members of “the Squad” are upset at the nomination of Bruce Reed, who is described as a moderate “deficit hawk.”

Reed was announced on Tuesday as the presidential deputy chief of staff by the Biden transition team.

In a petition shared among progressives, it states, “Putting someone in the administration who will prioritize paying down the deficit ahead of all other concerns in charge is a recipe for cutting our earned benefits and turning the COVID recession into a depression.”

Progressives are also becoming increasingly alarmed that Biden’s Cabinet are those who have spent substantial time at America’s biggest corporations, Washington D. C., and Wall Street.

Ocasio-Cortez called it a, “revolving door of corporate insiders.”

During the campaign, the Biden team made it appear as though the progressive wing of the party would have a substantial seat at the table.

If there are more nominations such as Bruce Reed, progressives may continue to be disappointed.

A lot of people have asked for a link to last night’s remarks on IG live.

Here are the remarks in full (captioning currently being generated): https://t.co/6DU1QN3UIr