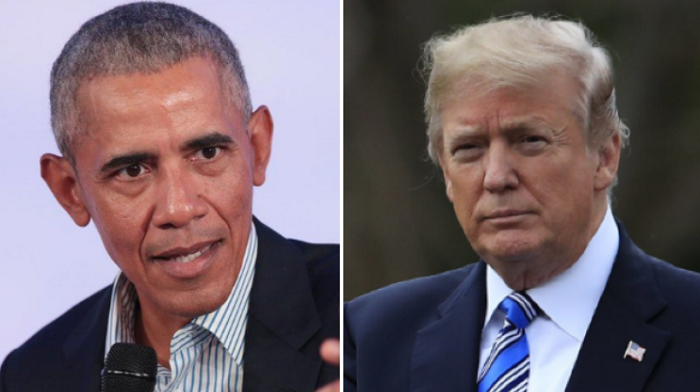 Barack Obama took aim at the President, blasting him as a “two-bit” dictator” following a report which claimed Trump would declare victory on Election Day.

An Axios report on Sunday indicated Trump was prepared to declare victory if he finds himself in the lead, even if all ballots hadn’t been counted yet.

Trump has said repeatedly that the assertion is false, and in an interview this morning explained he would make an announcement “only when there’s victory,” and that there is “no reason to play games.”

At a rally for Joe Biden in Miami, Obama jumped on the report.

“He’s been coddling dictators for the last four years,” Obama, who coddled mullahs in Iran and dictators in Cuba, said. “And now, apparently, he says he might declare victory before all the votes are counted tomorrow.”

RELATED: Hillary Clinton Advises Joe Biden To Not Concede on Election Night ‘Under Any Circumstances’

Obama Calls Trump a ‘Two-Bit Dictator,’ Said Nothing About Biden Not Conceding

By most accounts, Obama seems to be a pretty bright guy. So he surely knows that voters can peruse the internet and see that the Biden campaign has been preparing to refuse to accept the election results all along, right?

A Democratic data and analytics firm has been claiming that it might appear that President Trump wins re-election on November 3rd, but could “ultimately lose when all the votes are counted.”

In other words, Trump would be way ahead on Election Night only to have the results swing wildly towards Biden as mail-in ballots come trickling in during arbitrary state-declared deadlines.

Additionally, Hillary Clinton has warned Biden not to concede the election “under any circumstances.”

Hillary Clinton has some advice for Joe Biden: Don’t concede in a close race.

The 2016 nominee sits down with @jmpalmieri and @sho_thecircus to urge Dems to pay close attention to GOP strategy. pic.twitter.com/REwfLf1QjS

“Joe Biden should not concede under any circumstances,” Clinton warned. “Because I think this is going to drag out, and eventually, I do believe he will win, if we don’t give an inch and if we are as focused and relentless as the other side is.”

Yet, in Obama’s mind, Trump is a dictator while Biden is a man of moral courage.

Perhaps this is why Clinton has been kept out of the public eye while Obama gets to bask in the glory of campaigning again.

Obama’s rantings have him sounding less like a dignified former president and more like an unhinged cheerleader from the ‘Squad.’

He recently took a bizarre jab at Trump, suggesting the President is jealous of the ratings COVID-19 is receiving.

“What’s his closing argument? That people are too focused on COVID,” Obama spat. “He said this at one of his rallies. ‘COVID, COVID, COVID,’ he’s complaining. He’s jealous of COVID’s media coverage.”

“If we were focused on Covid now, the White House wouldn’t be having its second outbreak in a month,” Barack Obama says to Orlando voters, adding that President Trump has “turned the White House into a hot zone” pic.twitter.com/R3RABEi9WB

For his part, President Trump has been thrilled that Biden is attaching himself to Obama prior to the election. It is a solid reminder of why America voted for him in the first place – to get away from the Obama-Biden failures.

“Obama is campaigning for us. Every time he speaks, people come over to our side,” Trump tweeted. “He didn’t even want to endorse Sleepy Joe. Did so long after primaries were over!”