A VIEW FROM THE CROSS HALL 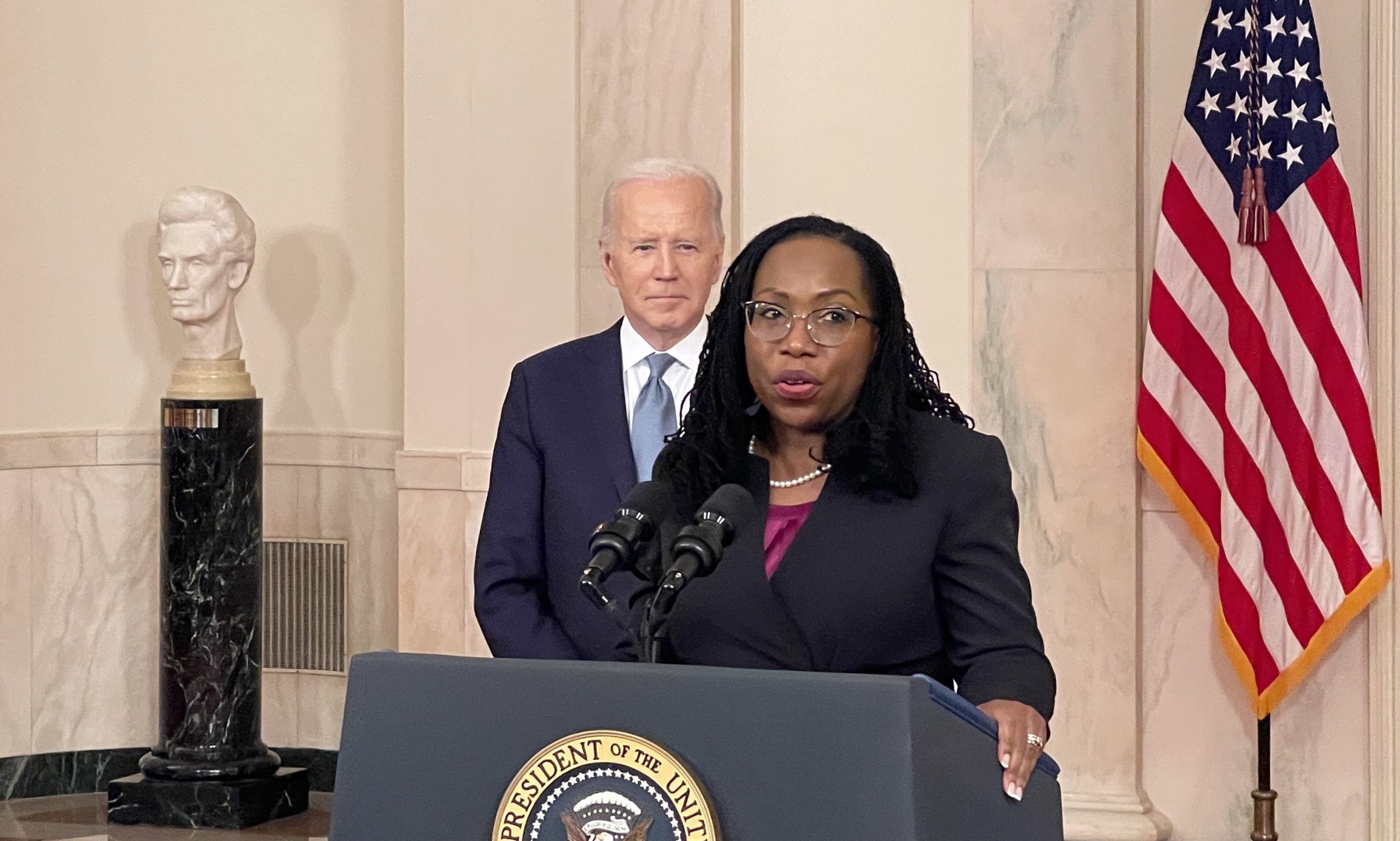 Word began to trickle out late on Thursday that President Joe Biden had selected a replacement for retiring Justice Stephen Breyer. Signs pointed to the longtime frontrunner, Judge Ketanji Brown Jackson of the U.S. Court of Appeals for the District of Columbia Circuit.

Just before 9 a.m. on Friday, some of the TV networks reported that it was indeed Jackson. And at 10 a.m., the Biden White House, eschewing the drama and game-show flair President Donald Trump employed with his high court nominees, removed any doubt by releasing a statement announcing Jackson as the pick. And soon after that, word came that Biden would introduce Jackson at a White House ceremony. The event would be at 2 p.m. in the Cross Hall, the president’s updated schedule said.

Recent Supreme Court nominee unveilings have been in the Rose Garden (the never-confirmed Merrick Garland by President Barack Obama and Amy Coney Barrett by Trump) and the East Room (Neil Gorsuch and Brett Kavanaugh, both by Trump).

The Cross Hall, which I had to look up, is the long hallway with the red carpet in the middle of the first floor of the White House. I had wondered whether the White House would follow the recent custom of inviting lawmakers, advocates, friends, and family members of the nominee to such ceremonies. The historic nomination of the first Black woman to the court certainly merited such treatment.

But a number of factors conspired to make that idea difficult. First, there is still the pandemic, and a large indoor gathering, or even one on the grounds outside, would invite comparisons to the Barrett ceremony that ended up being tarnished as a COVID-19 superspreader event. The Senate being out of session this week is likely another factor in the smaller-scale event, as the Associated Press suggested.

And, of course, there is the world crisis involving Russia and Ukraine. The White House was adamant that the president would meet his self-imposed end-of-February deadline to announce the nominee, but a large celebratory event might have seemed out of place amid the crisis.

So when reporters are ushered up to the Cross Hall, it is clear it is going to be purely a made-for-TV event. There are a few White House staffers off to one side, crowding a vestibule and small stairwell adjacent to the hall. The only person I can recognize is Doug Jones, the former senator from Alabama who has been designated as the nominee’s “sherpa” for the Senate confirmation process.

Presidents Bill Clinton and George W. Bush are here. Not in person, but their portraits frame the vestibule or entrance hall leading to the Cross Hall. Clinton announced Breyer, as well as Ruth Bader Ginsburg, as his nominees in the Rose Garden. Bush unveiled John Roberts (initially for Justice Sandra Day O’Connor’s seat) from what official archives term “the state floor,” which appears to have been at one end of the Cross Hall. And Bush announced Samuel Alito from the same Cross Hall spot where Biden and Jackson will soon arrive.

President Lyndon Johnson announced the first Black nominee to the Supreme Court, Thurgood Marshall, with an evidently quickly organized event in the Rose Garden in 1967.

“The President, as is his custom, gave no advance hint of his selection,” The New York Times reported at the time. “Reporters were unexpectedly called into the White House Rose Garden outside his office shortly before noon.”

President Ronald Reagan, announcing his historic choice of the first woman on the court, Sandra Day O’Connor, in 1981, spoke from the relatively informal setting of the White House press briefing room, as he did to unveil his later high court nominees. More remarkably, the historic nominee was some 2,300 miles away, in Phoenix, Arizona, when that happened. O’Connor, then a state court judge, held a short press conference of her own in Arizona, largely deflecting a question about being the first woman nominated.

Back in the Cross Hall, a few minutes before 2 p.m., first lady Jill Biden, first gentleman Doug Emhoff, Jackson’s husband, Patrick Jackson, and one of their two daughters, Leila, arrive and take seats as the only official audience members. (The couple’s other daughter, Talia, is “up in school in Rhode Island,” Jackson will say.)

The president refers to the Ukraine crisis at the top of his remarks.

While Biden refers to Jackson’s parents as having “grown up with segregation” and having attended historically Black colleges, he only obliquely refers to the fact that he is nominating the first Black woman to the high court.

“For too long, our government, our courts haven’t looked like America,” he says. “I believe it is time that we have a court that reflects the full talent and greatness of our nation.”

Jackson has “a pragmatic understanding that the law must work for the American people,” Biden says. “She strives to be fair, to get it right, to do justice.”

When Jackson steps to the lectern, she thanks the president for taking care with his constitutional duty “with all that is going on in the world today.” And she thanks Harris for her “invaluable role in the nomination process.”

She notes that she has had family in law enforcement, and an uncle who “got caught up in the drug trade and received a life sentence.” (Obama commuted the sentence.)

“If I’m fortunate enough to be confirmed as the next associate justice of the Supreme Court of the United States, I can only hope that my life and career, my love of this country and the Constitution, and my commitment to upholding the rule of law and the sacred principles upon which this great nation was founded, will inspire future generations of Americans,” she says.

Jackson thanks her family and others, and says she would like to thank many others, but “time is short.” She ends by noting that she shares a birthday “with the first Black woman ever to be appointed as a federal judge” — Constance Baker Motley, a legal titan of the fight for desegregation and civil rights and later a federal district judge.

“I proudly stand on Judge Motley’s shoulders, sharing not only her birthday, but also her steadfast and courageous commitments to equal justice under law.”

The president, the vice president, and Jackson soon depart the Cross Hall through a pair of double doors into the Blue Room, with Biden not hearing or ignoring a shouted question from one reporter. It’s on to the confirmation process, and time is short.