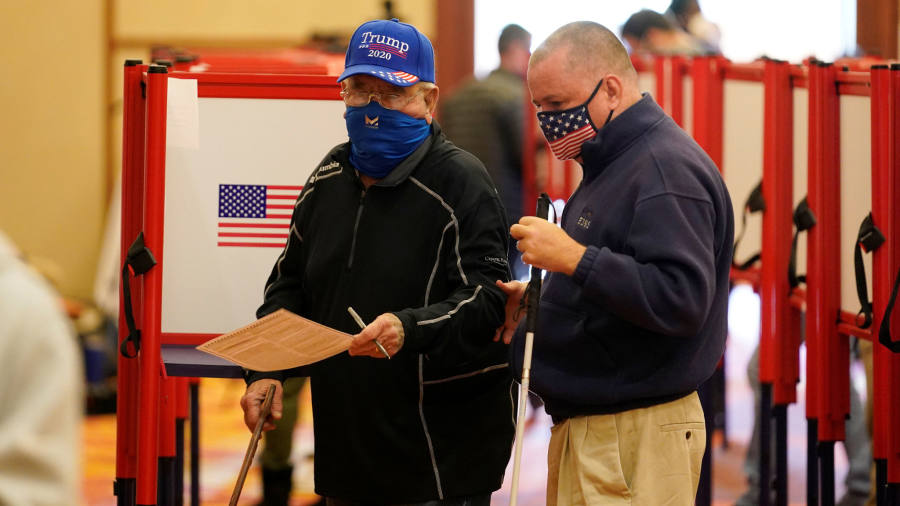 For days, American shopkeepers have been boarding up stores, and police have been planning for riots. Today, many US schools, including some in NYC where I live, were closed in anticipation of election violence. And yet, from the early looks of it, November 3 may be much calmer than most pundits would have predicted.

Part of that may be down to the fact that so many people have voted early. More than 100m people, nearly a third of the country, cast their ballots before Tuesday’s voting had started. In that sense, Covid-19 has been a blessing for participatory democracy — early voting is in large part about the efforts that states have gone to in order to make the election safer.

It may also be about the strength of conviction that people on both sides of the aisle in the US feel about their political choices these days. We’ll probably see as many as 20m-30m more votes this time around than 2016.

But even if things go the way I predict they will, and Joe Biden wins, I doubt we are going to see major social unrest. We’ve braced ourselves for the fact that the final tally in some key states may take several days. For weeks, we’ve heard the president say he’ll question the outcome no matter what. But there have been only isolated cases of disruption around the country in the middle of the most politically divided moment in decades.

Three things we have seen — first, the blocking of a bridge in New York City and the surrounding of a Biden bus in Texas by Trump supporters, which looked like futile gestures of rage, rather than some well organised and worrisome insurrection effort. They just didn’t make any sense.

Second, in Detroit, on Monday a couple of people showed up at voting sites to cause trouble. They were clearly paying attention to what Trump was saying about poll watchers and acted on it — but they weren’t an army or a concerted effort. They were mentally fragile people who took Mr Trump seriously. Again, this isn’t serious social unrest; it’s isolated fringe behaviour.

Third, there have been multiple instances of voter suppression in the south, of course, some purportedly by the Klan. But again, they were not well organised or new evidence of something broader and more systemic than what we’ve seen in the past (though that’s not a reason to not be totally crushed that we still have 19th century behavior in 21st century America. This is stuff being done by hateful people that were always there. But in a big country like the US, local pathologies here and there don’t make a new civil war.

Trump senior adviser Jason Miller equating the counting of votes with the stealing of an election was worrisome, for sure. But of course he has no legal leg to stand on, and the Trump campaign itself seems not to have pushed that point any further.

We’ll see what happens should any contested results need to go to the Supreme Court, which is now starkly divided after the appointment of three new justices by President Trump. But I suspect that the real rebellion will come not in the streets, or in the courts, but within the Republican Party itself. I’ll blog on that later today.